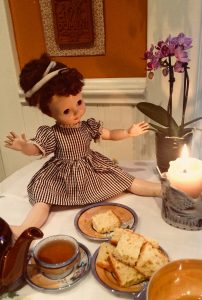 I want to talk today about preparation, readiness, and waiting.

When I was little I would periodically organize a party for my two dolls. The preparations for this tremendous occasion were… well, total. The whole room had to be cleaned and often entirely reorganized. The dolls’ clothes had to be washed and ironed and so did the dolls’ hair – I still have one of those dolls, her hair deplorably matted from too much shampooing. The table had to be set. At about this point, inevitably, bedtime arrived. Again and again, no party at all-I had run out of time.  I remember my tears of protest. I think I was conscious even at the time of my poor mother’s helplessness in the face of it all.

My mother, of course, was not a liturgist.  The joy of liturgy is that things do happen when they are supposed to. Here, the table is ready almost every day and at least three times on Sundays.

This world… the world that is beautifully prepared and ready (like our altar here), the world that is almost afraid to hope (have you got your phone? Are you signed up for news bulletins by email? Are those EVER good news?), and the anxious world that is afraid it can never be ready (the world of my childhood) is precisely the world Jesus was born into.

Since Christmas, we’ve been tracking Jesus from Bethlehem to now, with glimpses of his baptism and early miracles, a luminous season of revelation, and now we come to this story in Luke’s gospel.  It’s only found in Luke. And Luke brings us to Jerusalem, the centre of both political and spiritual power in Jesus’ day, as a way of proclaiming who Jesus is.

One part of this proclamation is that Jesus was born in into an observant Jewish family. That’s shown when Mary and Joseph bring their baby son to the Temple with an appropriate offering… what has been prescribed.

You might be reminded of another scene in Holy Scripture, when Hannah and Elkanah bring little Samuel to the temple of their day, at Shiloh, to dedicate him to the service of God.  That passage was the appointed reading at Morning Prayer on Friday, February 2, our first observation of Candlemas.

A second part of this proclamation is that two devout Jewish people, Simeon and Anna, witness to who Jesus is.

In the Eastern Church this holy day, because it commemorates when Mary and Joseph and Jesus meet Simeon and Anna, is called the Feast of the Meeting of Our Lord.

“My eyes have seen your salvation” Simon says; and Anna speaks “about the child to all who were looking for the redemption of Jerusalem.”

Because a third part of the proclamation… who Jesus IS… is WHERE this meeting happens: In Jerusalem, the start and the end of Jesus’ human life.

When I used to meditate on this story, I would picture the Temple something like our Cathedral but without pews, with more dust and more sunlight, with natural stone, but more or less this scale.  Or a little larger and higher.  Marie Reine du Monde maybe.

Not so.  I invite you to consider that the temple complex in Jerusalem at that time was about the size of 25 football fields.  As expanded and rebuilt by Herod, the walled complex, with vast outer courtyards-everyone could come in to those-inner  ones for Jewish people, all built surrounding the central Holy of Holies… this whole complex would have covered one-third MORE space than all of Parliament Hill (including the green lawns).

So far, the prophets’ prediction seems to be unfolding according to plan. But is it?

Consider that Luke has just shown Jesus the parents bringing the baby and their very small offering… two turtledoves or two pigeons.  The offering of the poorest folk.

When Hannah and Elkanah dedicated Samuel to God, did they bring pigeons? No!  I was reading this passage in French on Friday… they brought a TAUREAU. A bull!

So here, where Luke puts Jesus at the centre of Jewish life and faith, he also tells us he is one of the have-nots.  His arrival both fulfils the scriptural promises, and sends a shiver to the established order.   And… spoiler alert… by the time the Gospel of Luke begins to be put in writing, this Temple has been completely destroyed, and with it, the world of Judaism as Jesus would have know it has been blown to smithereens.

What do we know about this Jesus, what do we ourselves proclaim?

Jesus’ coming is INCLUSIVE.  The faithful witnesses to it are a man and a woman (This is a pattern in Luke… when a man does something, next a woman is shown doing something very similar.) And it’s for all people “A light for revelation to the Gentiles and for the glory of your people Israel.”

Jesus’ coming is TRANSFORMATIVE.  Not for nothing have the New Testament writers quoted Malachi (which we know best, I think, from Handel’s Messiah) “For He is like a refiner’s fire!”

We know that Jesus had an effect on everybody who came into contact with him.  Maybe this particular story was written as much to proclaim that truth as to record it as a biographical fact.  But it’s consistent with what we read about Jesus as a grown up…  People who meet him go away different.  In fact it’s safe to say that the world that met him, came away different.

Jesus’ coming is LIBERATING. Jesus will, as the writer of Hebrews says, “free those who all their lives were held in slavery by the fear of death.”  And this is not two thousand years ago.  You and I are invited… even commissioned… to participate in this activity.

Whether it’s bringing a bag of fresh fruit to somebody who has been neglecting their health,
or teaching a class of students to think clearly and come to honest conclusions,
or facing up to our personal and collective truths,
or showing compassion to the next person I meet, with a word or simply a loving look
or, as we will do in a moment, praying for each other and the church and the world, including the least fortunate as well as for the leaders of the nations

we are already in the Christlife:  that baby, who was “destined for the rising and falling of many in Israel and to be a sign that will be opposed” was born for us.

This brings me back to waiting, and preparation, readiness.  Are we ready to receive this light through and through?  In the dark corners, whether inside ourselves or outside in our world?

That little girl, who never managed to finish the party she was giving for her dolls, was trying to do it all by herself. And failing.  My grandmother used to say… if for instance, I was threading a needle with my back to the window… “you’re standing in your own light.”  Sometimes we don’t need to travel far to have that light.  Simply to turn.

One of my bosses when I worked at McGill was a manager of amazing zeal. He would arrive early, leave late, striving ceaselessly for perfection great and small… in strategy and in punctuation. We also had an Italian janitor, Guiseppe Caruso. He was cleaning one evening when I was working late, too.  “Viviana,” he told me, “Mister K. he thinka he must maka no mistake.  Already he maka first mistake.”

And then there is “Come As You Are.”

Because the moment is now.