The Homily by Ms Ranee Lee, CM
at the Jazz Vespers service on Sunday, July 3, 2022: Holy Ground: Encountering God in the City

Music is a Universal Language. It has the unique ability to communicate and connect us to the universe in ways that can not be found elsewhere.

The Universe is the creation of the Holy Architect and we are the energy that emanate from the Creator.

In theory jazz is a powerful spiritual communicator. While we develop the skills of self expression and musical knowledge, we also engage in exploring and learning more about our spiritual identities, erasing boundaries, facing challenges, connecting emotionally, and honestly respecting our environment, heart to heart and soul to soul!

Throughout history, music has been used in cultural and spiritual ceremonies in ways to survive, find strength, and build endurance. Whether in the form of a cappella singing, chanting, or percussions, it was proven to be spiritual and a positive offering to the needs for the quality of life…

Jazz music is the offspring, and reflects a personal and specific identity for its collective purpose, and properties!

If we are open to the saving and healing powers of Jazz, it often resonates on a much deeper and individual level.

It reaches into the soul. The music of jazz embraces influences from every and any genre of music, and is open to influencing any and all other styles in return.

This distinction has allowed me from personal experience to gratefully explore the landscapes of my own performances as a Jazz Vocalist.

Whatever your desired choice of music, it does affect the mind, body and spirit in substantial ways. Think of the times even when without acknowledging it, music has been the soundtrack of a particular or important event in your life, or when you rejoice, and when you pray.

Its uniqueness can fill you with an indescribable sense of presence and community, this is a spiritual, and musical moment!

We-ARE- Music! Because music is an emotional conduit that carries our feelings and sentiments in lyrics or instrumental phrases, and is rhythmically balanced like the beating of the heart.

Tempos colour our expressions and shape the meaning of the message, communicating whatever the subject implies.

The art form of jazz music qualifies in all the same meaningful and personalized elements. Instrumentally or lyrically, it imports significant talents that represent the human connection, and communicating our conversation with dynamics, accents, structure, presentation and information!

When we consider the music of Jazz, it is a form of worship!

Each note can reflect eternal passion, and reverence that identifies the soulfulness in the interpretation and performance of the players, composers and the arrangers spiritually… as it manifests in the gifts of communion with one another.

When we connect to the listener, and the audience who share the same jazz experience, we ultimately commune in spirituality.

Ephesians 5, Verse 19
Speak to one another with Psalms, hymns and songs from the spirit. Sing and make music from your heart to the Lord.

In ancient times I read, humans relied on notes and melodies for spiritual and religious worship, because they recognized the true power of music, much as we experience it today in our hymns, songs of worship and gospel music. But as far back as 3000 BC, society would strictly keep music only for religious ceremonies and the elite. Eventually music would be adopted by the common people and spread around the world into different genres and styles, and finally uniting US as jazz enthusiasts.

As spirituality evolved into different forms, each religion made its own music: Islam, Christianity, Orthodox and on,

All bring Peace, fulfilment of Faith, Adoration and Confirmation!

When we speak of the music of Jazz and the universality in which it’s perceived, its musical rituals, and individual contribution become collective goals.

I personally experience the positive, and liberating venerable commandments of jazz, and it is therapeutic!

In a most significant demonstration of spiritual connections, the outstanding devout contributions to the art form of jazz is reinforced by numerous notable instrumentalists and vocalists alike, drawing from their inward beliefs and convictions, reinforced by the strengths of their musical knowledge and performances, all seem to work in synchronicity.

Hearing “the Divinity in the music”: A Quote selected from Dizzy Gillespie, and, to quote further:
“When I encountered the Baha’i Faith, it all went along with what I had always believed. I believed in the oneness of mankind. I believed we all come from the same source, that no race of people is inherently superior to any other.”

Becoming a Baha’i influenced Gillespie’s life in every way. He wrote that it gave him “a new concept of the relationship between God and man—between man and his fellow man—man and his family.”

John Coltrane, was perhaps the most outspoken spiritual jazz musician in the modern era.

In the liner notes of his recording of “A Love Supreme” (1965), Coltrane states that in ’57 he experienced: “By the grace of God, a spiritual awakening which was to lead me to a richer, fuller, more productive life. At that time, in gratitude, I humbly asked to be given the means and privilege to make others happy through music.”

He presented it as a spiritual declaration that his musical devotion was now intertwined with his faith in God. In many ways, the album mirrors Coltrane’s spiritual quest that grew out of his personal troubles, including a long struggle with drug and alcohol addiction.

Harpist and pianist Alice Coltrane’s legacy has been somewhat shrouded  by the legacy of her husband, John Coltrane. In fact, few know that she replaced McCoy Tyner as pianist in John Coltrane’s quartet until Coltrane’s death in 1967.

An incredibly gifted avant-garde musician, composer, and arranger, who was also deeply moved by two spiritual experiences that subsequently became integral to her body of work. Left alone to raise her four children, Alice Coltrane sought truth through meditation and prayer, and traveled to India. There she said, she was called into God’s service.

As a result, her work incorporates many of the aspects of India’s Hindustani musical traditions like drones, ragas, Tabla- drum, and sitar. Her innovative work, especially her collaborations with saxophonist Pharaoh Sanders, are as sublime as they are indelibly important to the tradition.

The name Duke Ellington is synonymous as a contributor to the foundation of big band jazz, and a legendary composer of many great works of historic arrangements, but equally he was highly influenced by his Christian roots.

In a Spiritual biography, he is quoted to say, that his great passion of works spring from the awareness of the presence of God in all of life! Ellington’s “Black, Brown and Beige Fantasy” which also featured the angelic and soulful sounds of Mahalia Jackson is a wonderful example of the music of Faith, Soul, and Jazz.

We don’t have to revisit the past of great spiritual music influences, in our own community and presence today, we have a genuine spiritual music advisor. He is known as a great musician, a brilliantly skilled pianist with passion, love and empathy that shines as the spirit moves through him pouring out grace and soulfulness with friendship and humanity. His music revives and stimulates the soul. Players and listeners alike are filled with the serenity and benediction of his message through his spirituality and the music of Oliver Jones.

Jazz musicians often see themselves as musical story tellers, which I have a strong and personal connection to as well, and this…. can be considered as eavesdropping on prayer,
a lovely quote by Rev. Cliff Aerie, a United Church of Christ minister, and the founding director of the Oîkos Ensemble, in Missouri, USA.

He is also a musician, storyteller, playwright, actor/director, author, photographer and media producer, he has spent a lifetime exploring the adventurous terrain of creativity, a journey discovering the imaginative landscape of the soul.

I have recently read that the word “music” is divided into two parts.
Mus: which translates in Hebrew to
“Something that’s been taken out-of-something”
i.e., Improvisation!

And ic: which means “Spirit” in Ancient Egyptian.
Making music by definition, Spiritual!

And Jazz as it’s progeny, and corporal spiritual body, makes it certifiably So!

Here is a little exercise I’d like you to think about right now, on just a few jazz definitions and expressions, ask yourself which of these would best describe your personality?

I personally have already found my ten!

When you find your predilection, it would be interesting to confer with family, partners or friends, or just ask yourself

Why do I define this choice or these choices to my personality!

In any case the interpretive nature of jazz is a universe in its self, we are all forms of the source, and Jazz is Spiritual!

Praise Him for the voices, and the ears that listen! 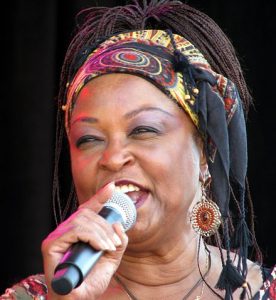