An all-ages sermon for the first Sunday in Advent

It is the first Sunday in Advent – a season set aside to prepare for the fulfillment of God`s desire for creation, for the day when God’s will will be done on earth as it is in heaven, for the day that Christ returns.

The Sunday School has been reading Isaiah’s vision of the new heavens and the new earth that God will create – a world where there is no illness and no violence and no sorrow, a world where everyone shares and respects one another, a world where even wolves are vegetarian.

And that is just what Jesus tells us to do in today’s reading from the gospel according to Mark. Unlike Christmas day, which we know is coming in only 25 days, we don’t know exactly when the new creation will be completed so we can’t make a calendar – although lots of people have tried. But that doesn’t mean there is nothing to pay attention to. Jesus tells us that there are signs that will show us when that day is coming, just like the flowers on a fig tree show us that the fruit is coming; or like trees losing their leaves shows us that winter is coming.

So what are the signs? How do we know that the day when God’s will is complete is coming?

This is Malala Yousafzai. Malala is from Pakistan and she believes that all children, including girls, should get to go to school. Not everyone in her country agrees with her. Some people think that only boys should go to school. But Malala worked hard to go to school herself and to help other girls go, too. When Malala was 15, she was shot in the head by members of the Taliban, a group of people who wanted her to stop trying to change make their country more just for girls and women.

Even getting shot didn’t stop Malala, though. She got better and continued to go to school and fight for the rights of girls. And this year, she won the Nobel Peace Prize!

But Malala winning the prize is not the sign that the Kingdom is coming. That’s a little glimpse of what the kingdom will actually be like. Malala being shot is the sign of its coming.

This picture is from the People’s Climate March in New York City last September. 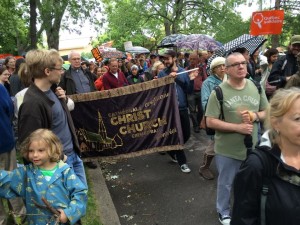 Over 400,000 people took to the streets there – and hundreds of thousands more all over the world, including here in Montreal.

For a long time, scientists and environmentalists have tried and tried to explain to governments and companies that we have to change the way we use the earth but they won’t listen. These marches are a way of shouting at the people who don’t want to change because it will be too expensive or too scary or make them lose too much power. They are also a way of shouting at all of us to change our behaviour, too.

This picture is from the town of Ferguson in the United States. A young black man named Matthew Brown was shot by a police officer named Darren Wilson in that town. Matthew was unarmed and had his hands in the air. Last week, the grand jury decided not to charge the police officer with murder. This is not the first time something like has happened to a black man because our society (not only the United States) too often treats black people very, very badly – to put it far too simply.

People in Ferguson and all over North America are protesting this treatment. There has been violence and fear and anger from the protesters and from the police in many places. No matter what you think of the way people are fighting, I think we can all recognize the problem of racism and the need to change it.

So. Four signs that the day is coming when the new heavens and the new earth will be complete. But why are the signs so upsetting? So filled with violence and conflict? That’s not what Isaiah described; not what God desires for creation.

The difficulty, for us, is that God desires justice and peace and freedom– but not all people share that desire. In fact, if we are really honest with ourselves, we will find parts of ourselves that don’t desire it – parts that want to be more powerful, more wealthy, more important, more loved than other people. And lots of people just don’t really want to the world to change if it means they have to share.

So, when people join with God to create a new world, when people demand justice and seek equality, when God’s kingdom draws near, there is always conflict and violence.

Because these fights – all this chaos – are not signs of the new heaven and new earth itself; not glimpses of what the day will finally look like. The conflict and the fear and the chaos are only signs of its coming – the melting snow that shows us spring is on the way; the calendar that marks the passing of time until the promises are fulfilled.

So beware, keep alert – watch for the signs. In this first week of Advent, pay extra special attention to the places and the situations that need to change. Notice when people work for justice or peace, even when it is dangerous. Notice when people in power fight to hold on to what they have. And take heart. The day is coming.