THE RAOUL WALLENBERG MONUMENT IN MONTREAL

Strolling through the cloister garden behind the Cathedral, you may have noticed the rather large bronze bust of Raoul Wallenberg. 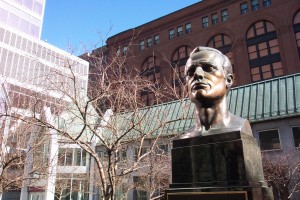 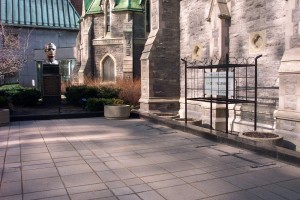 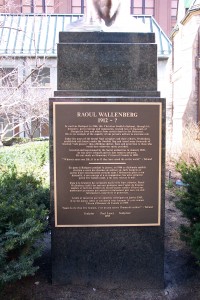 In 1944, during World War II, Raoul Wallenberg was instrumental in issuing thousands of Swedish protective passports, organising safe houses in Budapest that provided shelter for approximately 33,000 Jews, and distributing food and medicine. In late 1944, accompanied by his aides, he freed hundreds of people from the 125-mile “Death March”. He was eventually imprisoned and later declared dead by the Soviet government; he would be 83 years old today.

Known for having saved more Jews during W.W. II than any single government, a group of individuals in Montreal (including the late Alan Rose, O.C.) commissioned a monument to mark the 50th Anniversary of the liberation of concentration and death camps in 1945. The project was entrusted to sculptor Paul Lancz who created the bust of Wallenberg; Lancz himself is a survivor of the war in Budapest by means of a Swedish passport issued by Wallenberg. He came to Montreal in 1956, and among his works is the bust of John F. Kennedy on President Kennedy Avenue just west of Place des Arts.

In a brochure printed for the unveiling last November [1995], the following paragraph was included: “The Wallenberg Monument in the Garden of the Anglican Cathedral in central Montreal will be our City’s tribute to a remarkable Gentile who saved the lives of countless Jews and members of the resistance movement. It will be an abiding testament to what one person can do.”

(photos taken in March 2004, by the Dean of the Cathedral, Michael J. Pitts)