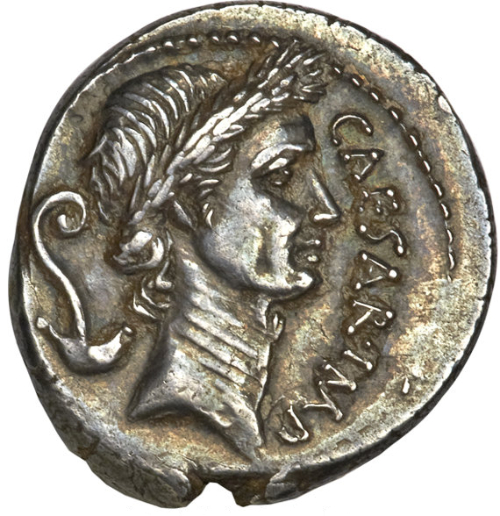 Today’s Gospel passage is Luke 20:19-26, in which the scribes and chief priest try to trap Jesus with a trick question:
“Teacher, we know that you are right in what you say and teach, and you show deference to no one, but teach the way of God in accordance with truth. Is it lawful for us to pay taxes to the emperor, or not?”

And they were not able in the presence of the people to trap him by what he said; and being amazed by his answer, they became silent.

Jewish refusal to pay taxes to the Roman authorities was already a political issue in Jesus’ time; it would become a central point in the First Jewish Revolt of AD 66-70 that resulted in the destruction of Jerusalem and its temple. So here, the questioners were trying to force Jesus to choose one side or the other – which he refused to do. But in his answer he pointed out two realms of authority: the emperor’s, or the whole secular world, and the world over which God has authority, in other words, the life of the spirit.

What an appropriate text for us as we begin our Advent journey, and begin hurtling (wide awake, one hopes) toward Christmas and its sacred and secular promises and expectations! During this year, which is unlike any other we’ve lived so far, how will we navigate the season without the comfort and joy of our familiar church building and rituals, without the warmth of extended family and friends around the table, without the ease and pleasure of shopping for our loved ones in the usual ways, and with a keen awareness of suffering and loss all around us? If we’ve ever had an opportunity to think about the season more deeply, surely this is it.

As a choir singer in a downtown cathedral, I’ve always been struck by the contrast as I emerge, after taking off my robe in the undercroft, into the mall beneath our building. One short glide down the escalator, and I’m in the maw of our consumer culture, where the melodies in my head are instantly drowned out by Muzak, and the quiet space of the Eucharist or, especially, Evensong, is assaulted by the sensory overload of shops that want me to buy their goods, and hoards of people happily participating in the primary religion of our culture. This contrast is never stark-er than during the weeks before Christmas, or during Holy Week and Easter.

Even though I haven’t been in the cathedral or the mall for eight months, I’m not immune: my inbox this weekend was full of offers for “Black Friday” — somewhat more kindly named “Vendredi Fou” here in Quebec — a day when I refuse to buy anything at all, I find it so offensive. Nevertheless, I’m wondering this year, as you may be, about those two worlds: what to do with my coins.

When I was young, my family made most of their gifts. My father and grandfather would spend secret hours down in their basement woodworking shop, while my grandmother and mother and aunts sewed, knitted, and cooked, and I made my own childish attempts. When it came time to open our presents, the ones that brought the most delight — and often tears — were these handmade offerings, planned and created especially for people we loved. Of course, it was a simpler era, when we all had less money and more of that precious commodity: time itself.

There’s a lot about this pandemic that has reminded me of those years. I’ve gone back to baking our bread and making our own yogurt, eating less meat, reading more, knitting and drawing more, paying attention to our plants and our cat, keeping in touch with far-flung friends, and trying to help others. Even though time seems to have sped by, I feel like I’ve used it a little better and more intentionally, and find I don’t really want to go back to the way I was living before.

And it’s not just the pandemic that has changed us: during this extraordinary year we’ve all been brought face-to-face with injustice and violence, disparity of wealth and access to healthcare, excessive use of power and authority, abdication of responsibility for one another, and the peril facing our earth itself — as well as equally extraordinary acts of selflessness, love, dedication, and courage.

So I’m thinking hard about how to apportion my gifts this Christmas — what goes to the emperor and what goes to God. Maybe we can take a step back from the need to spend a great deal, and instead support local makers and Black-owned businesses, buy Fair Trade goods, or medicines or farm animals in someone’s name through PRWDF; we can bake a box of cookies or fudge, or make a handmade card, and send it to a loved one along with a note say-ing how much they mean to us; donate to our church and to charities; we can have innovative online gatherings with friends; we can resolve to make further changes in our habits for the sake of the environment.

In a passage similar to today’s gospel parable, Jesus reminds us that where we put our treasure is where our heart is also. We’ve got a chance, this year, to do things differently, and in the name of love, give more to God of what is God’s.