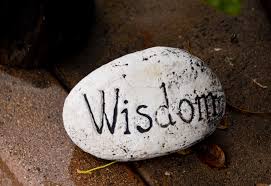 Again I saw that under the sun the race is not to the swift, nor the battle to the strong, nor bread to the wise, nor riches to the intelligent, nor favour to the skilful; but time and chance happen to them all. For no one can anticipate the time of disaster. Like fish taken in a cruel net, and like birds caught in a snare, so mortals are snared at a time of calamity, when it suddenly falls upon them.

I have also seen this example of wisdom under the sun, and it seemed important to me. There was a little city with few people in it. A great king came against it and besieged it, building great siege-works against it. Now there was found in it a poor, wise man, and he by his wisdom delivered the city. Yet no one remembered that poor man. So I said, ‘Wisdom is better than might; yet the poor man’s wisdom is despised, and his words are not heeded.’
The quiet words of the wise are more to be heeded
than the shouting of a ruler among fools.
Wisdom is better than weapons of war,
but one bungler destroys much good.  (Ecclesiastes 9:11-18)

There is nothing new under the sun. Subjugating other people due to their skin tone or ethnicity or religious beliefs is not new. The protests we are seeing today are not new. I think God is very annoyed at us. I think God is always angry when we mistreat other people made in her image. We have a clear history that shows what happens when people have too much power, when there are class differences, and when people’s voices are ignored or subdued. And yet we continue to repeat history, over and over again.

But as this passage shows us, wisdom can win against power. The king was not able to conquer this small city because of the wisdom of a poor man. We can also use the wisdom that we have to not let power win. We have seen that this can happen under the sun. It is possible.

But for it to happen, we need to be vigilant. Because wisdom is small and easy to ignore where power can demand our attention. Power is loud. And the best way to remember is to record. We need to record what is happening always. Especially now, when we have the technology to record the actions of people in positions of power. Because as human beings, we are very likely to forget it. We need to write histories down. Everyone’s histories. Even the ones that we are not proud of or make us uncomfortable. The ones that people have traditionally edited or erased. We owe the truth. Because the only way we will have wisdom win against power is to show us that it can; to show us examples of the times when it has; to show us examples of the times we have failed and let power win and the consequences which come of that. Evil is not new and goodness is not new.

But when they write the history of the fight for racial equality in 2020, let’s stand with Jesus who always stood with the marginalized and oppressed. No matter what happens let us be on the side of people demanding equality and justice. Let us never give in to the idea that this is the way things have to be. Because it isn’t. Injustices aren’t new under the sun – but neither is fighting for equality. There are a lot of examples of Christians ignoring atrocities and injustice. There doesn’t have to be another one.