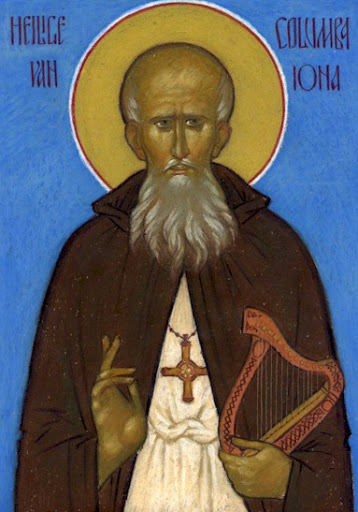 In a week’s time, a group of pilgrims from the Cathedral would have been on their way for a pilgrimage to Iona, a tiny island in the inner Hebrides, off the coast of Mull on the West of Scotland.  Seen from here in Montreal, or even from London England, Iona feels as if it sits on the edge of the world.  Even from London, it’s a 13 hour journey, which involves at least two train journeys, one ferry to cross from mainland Scotland to Mull, one coach journey across the Isle of Mull, and then another short ferry ride across to the jetty on Iona. Pilgrimages are as much in the journey as in the destination.

The island, which is famous for its influence on the development of Christianity in Scotland and the north of England, is usually busy with tourists during the day, and quiet again at the end of the day, when the last ferry has gone back.  There are about 100 inhabitants on this tiny island, supplemented by pilgrims staying with the Iona Community, in Iona Abbey. 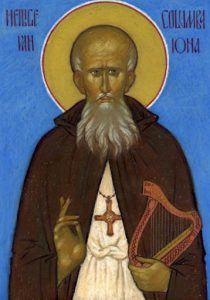 Today, the church remembers St Columba, an Irish monk and missionary who made Iona his headquarters after leaving Ireland on his missionary journeys.  For him, Iona was not the end of a long journey on the edge of the world.  Instead, in the 6th century, at a time when roads were sparse and dangerous, Iona was a very convenient hub from which to hop all around Scotland by boats and coracles, thereby facilitating the spread of the Gospel in a very Celtic fashion – in a harsh landscape where life was tough and where people were at the mercy of the elements.

The island – on which the Scottish kings have been buried – continued to be an important centre of Christian spirituality for centuries and medieval Iona Abbey – built in AD 1200 on the site of Columba’s monastery – still stands tall, the point of focus for so many pilgrims.

The project to rebuild the Abbey – which had been semi derelict – was led by George McLeod, a Scottish Presbyterian minister, whose parish was in a poor shipbuilding area on the bank of the Clyde in Glasgow.  At a time of high unemployment, McLeod found that the church was having a hard time connecting with the people.  There did not seem to be a common language between ministers, however well intentioned.  There was little trust between them, and little understanding of each other’s lives and work.

McLeod therefore decided to bring together a number of young ministers hot off their seminaries and a number of builders and craftsmen, in order to rebuild the common areas of Iona Abbey, the place where a now defunct Benedictine community used to live.  The project took place over many summers until the rebuilding was complete.

There was appetite for those who had taken part in the project to continue to meet, and the Iona Community became reality, an ecumenical community committed to working to change the hearts of all.  Members, of which I am one, do not live on Iona but instead are scattered around Scotland, the UK, and now the world, and continue to live by a rule of life which includes a commitment to prayer and reading the bible, a commitment to account for our use of money and our use of time, and a commitment to work for justice and peace and the wholeness of creation.

The Iona Community is a group of deeply committed and prayerful Christians, most of whom are also activists with wide interests in issues of justice and peace.  Attending our meetings can be exhausting because of the breadth of our interests and the many ways in which these are expressed into action.

One of my early learnings in the Community was that – even with the best intentions in the world – it was impossible for me to be involved in every single issue of justice and peace.  But even when I thought I was failing somewhere, I knew that some of my other fellow members would be deeply involved and active, and therefore together we could make a difference in many different areas in the world, thereby better contributing to building up the Kingdom of God in all its fullness.

At this time, many of us continue to be isolated at home, eagerly waiting for the day when we can be released back into the world and resume life in a way that will look a little more like what it was. Meanwhile, the world continues to show itself to us in all its brokenness.  Like the pilgrims of Iona, and all those who, like Columba before them, have needed a place from which to resource themselves in order to map out what our personal Christian calling might be, let us use this time and this place to discern our gifts, talents, and energies, that we may be ready and know how best to offer them to God.

O God, who gave to your servant Columba the gifts of courage, faith and cheerfulness, and sent people out from Iona to carry the word of your gospel to every creature, grant, we pray, a like spirit to your church, even at this present time. Further in all things the purpose of our Community, that hidden things may be revealed to us, and new ways found to touch the lives of all. May we preserve with each other sincere charity and peace, and if it be your holy will, grant that a place of your abiding be continued still to be a sanctuary and a light. Through Jesus Christ, Amen

A prayer for the Iona Community