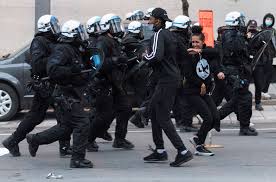 “Then you will be handed over to be persecuted and put to death, and you will be hated by all nations because of me. At that time many will turn away from the faith and will betray and hate each other, and many false prophets will appear and deceive many people. Because of the increase of wickedness, the love of most will grow cold, but the one who stands firm to the end will be saved. And this gospel of the kingdom will be preached in the whole world as a testimony to all nations, and then the end will come.” Matthew 24:9-14

I picked this date weeks ago, and it feels almost inappropriate that I should be offering my own words right now, as a white person. So I’m going to write this blog post primarily for white Christians.

On Sunday, I attended the protest against police brutality held in Montreal, which had an attendance of over 25,000. I left only an hour before the SVPM started firing canisters of tear gas and shooting rubber bullets into crowds of protestors, all of whom had been protesting peacefully until that point. I watched the footage on Twitter, as friends who were present shared with me about how the police had blocked the major streets so that protestors couldn’t escape, and had fired on them without warning. The next day, the premier of Quebec offered his support to the protestors but noted that he does not believe systemic racism exists in Quebec.

As an American living in Canada, Canadian exceptionalism was nothing new to me. The idea that Canada is the “nice neighbour to the north” is perpetuated by Americans and Canadians alike, and that is especially true when it comes to race. When the protests against the death of George Floyd started breaking out a week ago, I was shocked at the silence and dismissal that many Canadian white Christians had, seeing this as a uniquely American issue.

Canada, and Montreal in particular, have a deep and prominent history of racism. The resource noprisons.ca provides a concise history of anti-black policing in Montreal, stretching from the time of slavery to today, noting, “Between 2014 and 2018, the Montreal police killed another five Black men: Alain Magloire, René Gallant, Bony Jean-Pierre, Pierre Coriolan, and Nicholas Gibbs. A 2019 study found that Black Montrealers are 4x more likely to be stopped than white people.” Videos have surfaced numerous times of the SVPM intervening aggressively with black and indigenous individuals. Robyn Maynard, a Montreal-based black feminist activist and writer shares more in the CBC video below:

In today’s passage from Matthew, Jesus offers words of encouragement to those persecuted for the faith, urging them to stand firm and not let our love grow cold, to ignore false prophets and persist in the gospel. Reading this today, I think of police officers who blatantly lie about brutality and face no consequences. I think about political leaders who tell us that racism isn’t a problem, that if people just protested “peacefully” there wouldn’t be problems. I think of the dozens of videos I’ve seen today alone of police brutality assaulting kneeling protestors, medics, and news crews, with no mercy. I think about how the gospel doesn’t leave room for prisons or police. I think about what it means for us to stand firm in our faith.

White Christians, we cannot sit idly by. We cannot declare that because we are in Canada, or Montreal, that police brutality and racism are other people’s sins. Our baptismal covenant requires that we strive for justice and peace among all people, which means it is our duty as Christians to support black lives, and to fight for an end to police brutality.

If we are able, we must show up to protests. If we have funds, we must donate to grassroots organizations and bail funds. If we need to learn, we educate ourselves about our own church’s and country’s history of anti-blackness, and we strive to make our church and our world better. Jesus urges us to stand firm, and now is the time for strength.

Script in English and French to send to your elected officials (listed at the bottom) to cut the SVPM’s budget (currently $665,300,000, or 11% of the annual budget).

Protest in Montreal against police brutality and racism this Sunday.

Donate to US bail funds for protestors.