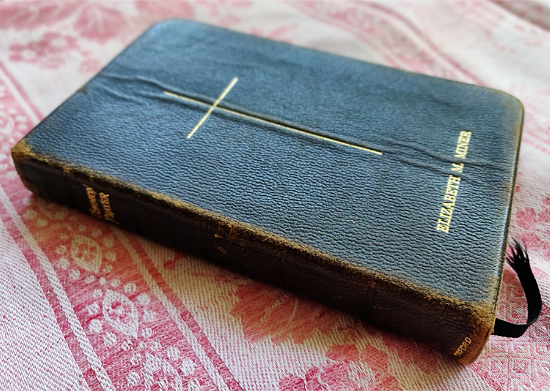 The righteous will flourish like a palm tree,
they will grow like a cedar of Lebanon;
planted in the house of the Lord,
they will flourish in the courts of our God.
They will still bear fruit in old age,
they will stay fresh and green,
proclaiming, “The Lord is upright;
he is my Rock, and there is no wickedness in him.”  (Psalm 92)

Today, June 19, is my maternal grandmother’s birthday. Born in 1900, she would be an impossible 120 years old today, but actually she did live a very long life, to the age of 92, “still bearing fruit in old age.” If I have an “Anglican” forebear, who somehow gave me my faith and also a willingness to be involved with, and work for, the Church, it was my grandmother.

I grew up my grandparents’ big Victorian house in a sleepy town in rural central New York. They lived downstairs, and my parents and I lived upstairs, but it was essentially one home so far as I was concerned, extending outdoors onto the porches and into my grandmother’s gardens. We lived across from the Episcopal rectory, and the church was next to it, across a street, so in addition to being parishioners, we were neighbors and friends with the priests and their families, who were also in and out of our house all the time. Behind the white-clapboarded, New-England style church was an extensive, centuries-old cemetery where my mother taught me to read the inscriptions on the tombstones, before I ever started school.

My father came from a musical Methodist family; my paternal grandfather was a Methodist minister and my grandmother a devout, white-gloved, conservative minister’s wife who never touched alcohol or played cards but loved music and dramatic reading. My tenor-voiced, irrepressible father had been the wild black sheep of that family of four children, and though I inherited the musical gift, their rigid spirituality didn’t have much appeal.

My maternal grandparents, by contrast, were liberal, worldly, expansive people. I guess you could call them “pillars” of the church: staunch supporters and consistent attendees. My grandfather was a frequent member of the vestry, my grandmother was active in the Episcopal Church Women and the altar guild. I grew up singing in the choir and my family always went to church, but I dropped out of Sunday School after a year; I was constantly questioning what was being said and taught, and having a smart but agnostic mother probably didn’t help.

But somehow, my grandmother’s steady faith became an example. She was outspoken and opinionated; a feminist; a longtime teacher; an avid reader; skilled cook, gardener, and seamstress; and a matriarch who ruled the family from her armchair, knitting basket and New York Times Sunday paper at her side (she did the crossword each week in ink). But also tucked away next to that armchair was her 1928 Book of Common Prayer, and a copy of Forward Day by Day, which she followed and prayed from daily, though I never saw her doing it. Her faith was a private matter, and I don’t remember discussing it with her very much, but even as a little girl, I sensed that it was what guided and steadied her strong ship. I spent many years away from the church, but I never completely stopped believing. I always felt that something from my grandmother had taken hold of me and was stored away inside; when I came back, it was clear to me that it was not only her faith, but her broad, inclusive Anglicanism with its love of language, ritual, and music.

After my grandmother died, my mother approached me one day with something in her hand. “I thought maybe you should have this,” she said, handing me my grandmother’s well-worn prayer book. She was right; of the various things I inherited from her, that little book is the most precious. Inside the cover are three simple prayers written in my grandmother’s Palmer-method handwriting: two for preparation for worship, and one for after: “Grant O Lord that the lessons I have learned may take root in my heart, that I may remain faithful to the confession of my faith, and that I may put my faith to practice in my daily life. Through Jesus Christ our Lord.” And I just noticed today that she had left the frayed black ribbon for marking pages at Psalm 139, my own favorite: “O Lord, thou has searched me out and known me,” which contains perhaps the most beautiful expression of God’s constant presence in all of Scripture. In the most difficult moments of my own life, I’ve often thought of  my grandmother, and gratefully felt her strength and steadying presence — which is, of course, simply feeling God through her.

This pandemic has made us all more aware of age, and the aged among us. It has made older people feel more vulnerable and isolated, and, to some extent, expendable; it has brought the pain of separation from loved ones and the fear and reality of dying alone. Western society is particularly good at discarding rather than respecting its elders and seeing them as a source of strength and wisdom. Navigating life’s challenges from a spiritual perspective really does boil down to “forward day by day”, as trite as it sounds; those who have done it have a great deal to teach us.

I love the image in today’s psalm of the human being flourishing like a palm tree, or a cedar of Lebanon, still bearing fruit in old age and staying fresh and green. So, on the positive side, perhaps this crisis could cause us to consider the ways in which we segregate by age, and how we could do more to encourage spiritual mentorship and friendship, as well as youthful companionship, within our own congregation.