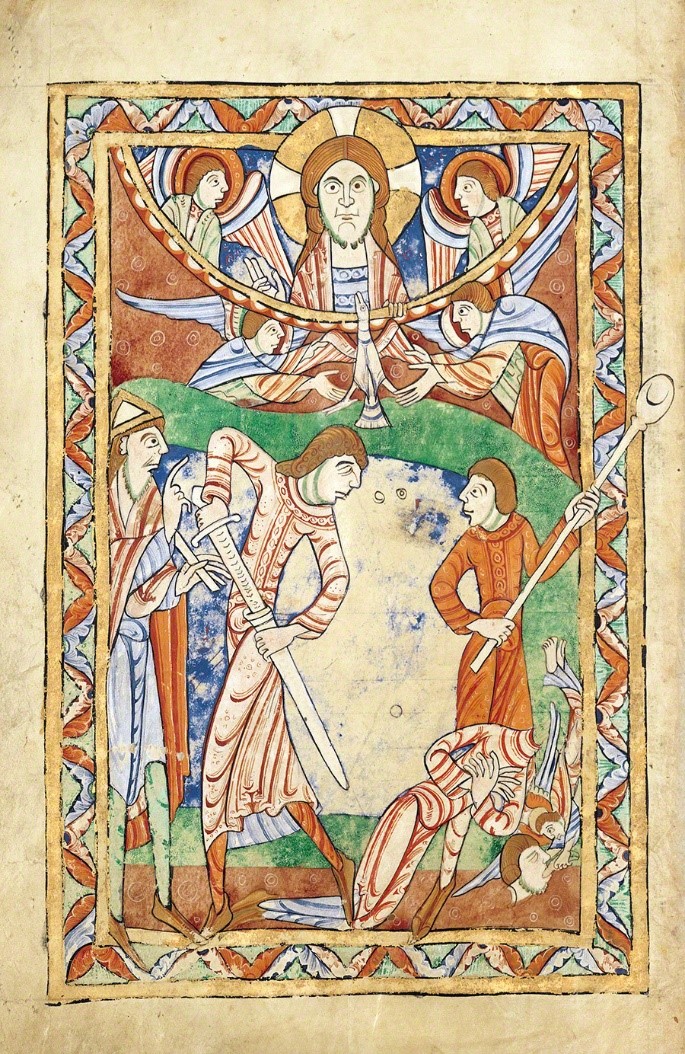 The souls of the righteous are in the hand of God,
and no torment shall touch them.
5 Chastised a little, they shall be greatly blessed,
because God tried them
8 They shall judge nations and rule over peoples,
and the Lord shall be their King forever.
9 Those who trust in him shall understand truth,
and the faithful shall abide with him in love:
Because grace and mercy are with his holy ones,
and his care is with the elect.

During the pandemic lockdown I’ve written about three people who showed both courage and faith: John Donne, who had the courage to admit that he found praying hard and the faith to persevere; Noah, who had faith that God had prepared a new safe world, and the courage to leave the haven of the Ark; Boniface, who, because of his great faith, had the courage to venture as a missionary among dangerous barbarian tribes. Today I want to talk about a fourth man of faith and courage, St Alban, England’s first martyr, whose death we commemorate today. According to the BAS he was killed in 304 AD, in the last century of Roman rule in Britain, but some historians dispute the date, pushing it back to an earlier period of persecution.

Alban’s story is told by the Venerable Bede in Chapter 7 of his Ecclesiastical History. According to Bede “the heathen rulers” – the Romans – “grew savage against the Christians.” Christianity was probably brought to Britain by traders quite early in the Roman period. We have long known from archaeological remains that a variety of pagan gods were widely worshipped in Britain at this time, but recent archaeological studies of cemeteries, Christian artefacts, and buildings which could be churches show that there were more Christians scattered around the country before Constantine’s Edict of Milan than previously thought. Alban was a pagan Roman soldier stationed at Verulamium during a time of bitter persecution of Christians. He gave shelter to a priest but was betrayed. When soldiers came to search the house Alban quickly donned the priest’s cloak and was arrested and taken before the magistrate. He was threatened with torture and execution if he denied the pagan gods, but Alban declared that he had become a Christian and would “ever worship and adore the true and living God who made all things.”

Parenthetically, in light of the current discussions about racism I was struck by the magistrate’s question “Of what family or stock art thou?” and Alban’s answer “What does it matter to thee from what race I come? Know that I am already a Christian.”

Alban was flogged and tortured, but remained steadfast, so the magistrate ordered him to be beheaded. He was taken to a hilltop, reversing the flow of a river which blocked the way. The executioner, a Roman soldier, was so moved by this miracle that he refused to behead Alban. A new executioner was found and Alban was beheaded, along with the soldier. Bede comments that even though the soldier was not baptised, “yet he was washed in the font of his own blood and made worthy of the eternal kingdom.” The story doesn’t say what happened to the priest, so perhaps we can imagine that he escaped. A gruesome corollary to the description of the beheading describes the executioner’s eyes falling to the ground along with Alban’s head.

When the period of persecution was over a shrine was built on the site of Alban’s martyrdom, becoming a great abbey in Norman times and now a Cathedral.

St Alban is very widely revered in the Anglican Communion as the first English martyr. For example, the oldest church in Ottawa, built a few years after our Cathedral, is dedicated to St Alban.

So, this is a story of remarkable faith and courage, but also a tribute to the power of selflessness. Alban knew what could happen to him when he sheltered the priest, but he did it all the same. The soldier surely knew he would die when he refused to execute Alban, but nevertheless he threw down his sword. The eventual executioner presumably felt invincible, but his moral blindness was punished with physical blindness. It would be nice to think that the stubborn cruelty of the magistrate was also punished, but that’s left to our imagination. Probably like the unjust police have done for so long he got off scot free.

This simple story challenges us to think about our own behaviour. Alban lived in turbulent times when following the wrong religion could lead to death. We live in turbulent times when having the wrong ethnicity can cause someone to be seen as a second-class citizen and even lead to death. We are being challenged to support Black Lives Matter and show in concrete ways that racism is unacceptable. We are being asked to listen to difficult stories about the consequences of prejudice. Alban was a pagan, a privileged Roman soldier, but he felt morally compelled to shelter the Christian priest, someone with whom he had nothing in common. Nevertheless, he was ready to listen to his guest’s teaching about the Christian God. He was willing to sacrifice his freedom to save the man who was being hunted and he was willing to be killed for his new beliefs. Alban is not the only person in narrative who showed courage. The forgotten hero of this story is the soldier who refused to behead the man he considered to be righteous.

Actions of faith and courage – can we too follow the saints along this path?

Featured Image: The Martyrdom of Saint Alban in the Saint Albans Psalter, about 1120-30, English. Tempera and gold on parchment. Dombibliothek Hildesheim