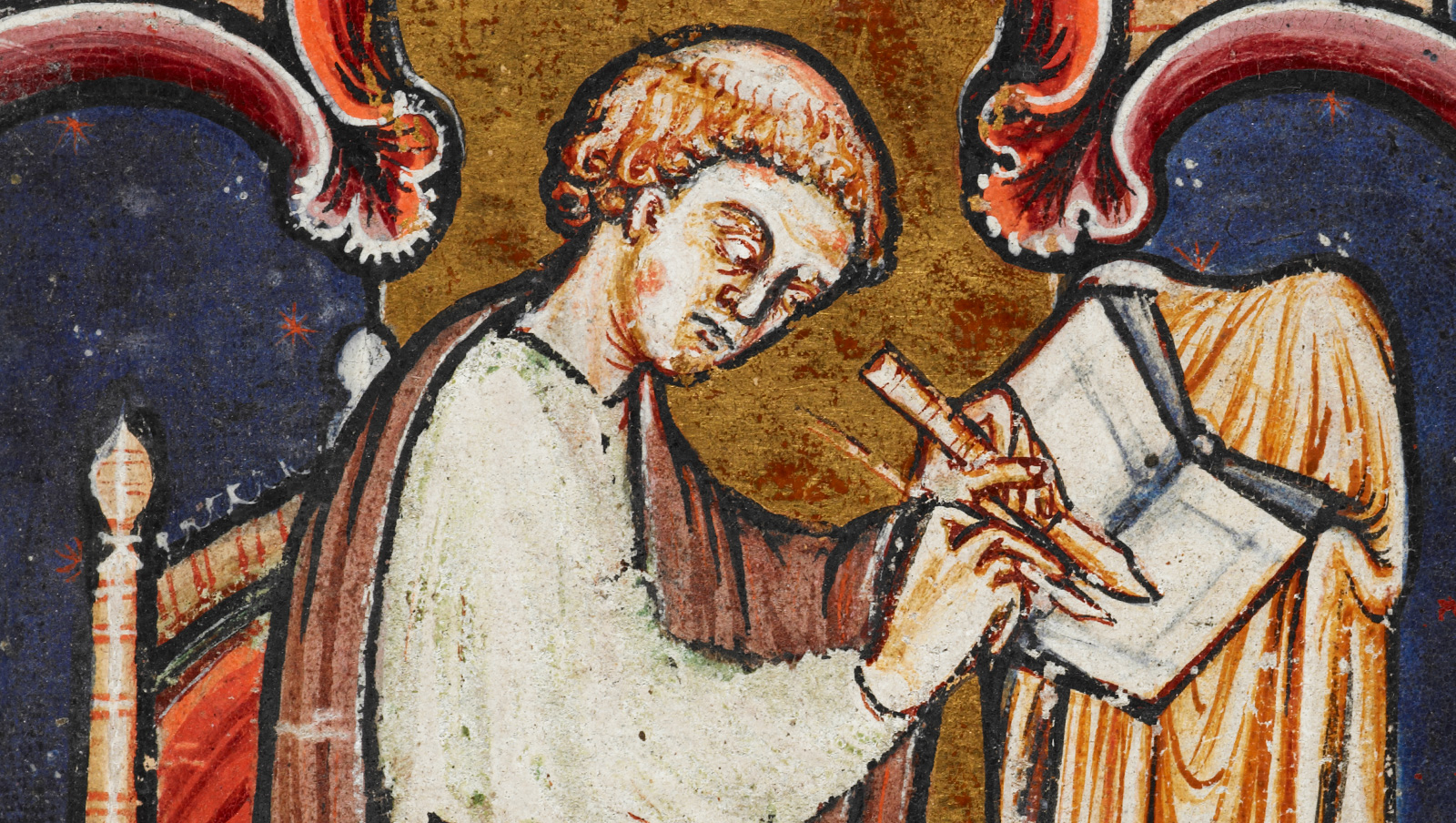 Today marks the feast day of the Venerable Bede, an Anglo-Saxon monk who died on Ascension Day (26 May) in the year 735. The day on which the Church remembers Bede has moved around over the course of history, in part as Augustine of Canterbury was already commemorated in the calendar of the saints at the time when Bede died on 26 May. Almost everything we know about Bede’s early life comes from his own monumental Historia ecclesiastica gentis Anglorum (Ecclesiastical History of the English People), which is one of the most important texts to chronicle the early history of the British Isles from the Roman conquest in the first century BC through to Bede’s own time, gaining him the title ‘Father of English History’. From this we can conclude that Bede was born around the year 673 in the Kingdom of Northumbria, modern-day northern England. He most likely came from an affluent, possibly aristocratic, family and, around the age of 7, he was sent to be an oblate at the monastery of Monkwearmouth. It was here that he met Abbot, later Saint, Ceolfrid.

Although Bede is documented to have visited a number of abbeys and monasteries across the British Isles, he otherwise spent his entire life at the twin monasteries of St Peter and St Paul, near modern-day Newcastle. From this isolation from the external world, he created an extraordinary body of theological and historical works, and it is through this hugely influential collection he gained the accolade Doctor of the Church, the only native British saint to have received such recognition.

While still a teenage-boy, plague struck the Kingdom of Northumbria, decimating the local population, including the monastery where Bede was still studying with Ceolfrid. We don’t know exactly how many people died, but there is the suggestion that most, if not the entire community was wiped out, with the exception of Ceolfrid and Bede. The two are said to have cared for the dying members of the community without fear, surely putting their own lives at great risk to show love and compassion for those who needed it most in their final moments of life. The pair also undertook responsibility for maintaining the regular sermons to the local population, ensuring a daily offering of prayer, teaching and pastoral support at a time when many were still gripped with fear.

The community had been brought to its knees – a community that was barely as old as Bede himself, having only originally been founded in 674 and only completed some eight years later, and with the second of the twin monasteries only having been built the year before plague hit. Eventually the plague passed over, and Ceolfrid and Bede faced the mammoth task of restoring the community and rebuilding its place in the local area as a centre of prayer, learning and refuge. The parallels with our own situation are obvious even if, despite the heart-wrenching destruction that has been cause, this virus still hasn’t wiped out communities in the same way that we know the plague did through much of the world’s history.

The gospel appointed today for the feast of St Bede is an extract from the story of the three parables, including the verse ‘The kingdom of heaven is like treasure hidden in a field, which someone found and hid; then in his joy he goes and sells all that he has and buys that field.’ Throughout this pandemic, much reference has been made, at least within creative circles, of various figures in history who, while in some form of lockdown or isolation, created monumental works of cultural significance. We might think of Julian of Norwich, who we commemorated recently; the composer William Byrd who, as a Catholic during the reign of Elizabeth I spent much time in a form of hiding, at least, composing some of the greatest choral works of the English Renaissance; even Bede himself is a figure to whom we could point as an example of someone who devoted himself to God in totality in his monastic life, a devotion and isolation without which much, if not all, of his significant works would never have come to fruition. On a more normal and perhaps achievable level, many of us have been encouraged to use this time as an opportunity to develop new skills, to hide treasures in our own fields, perhaps, ones that we, one day, will be able to dig up and show to the world.

I cannot help but think that many of us who study history have mis-represented some of the more salient parts of these various examples. Although many of these individuals were in a form of isolation, crucially they were not alone. Bede and Byrd, for example, were part of communities and households that functioned as societies-in-miniature, gatherings of multiple individuals, and in the case of Byrd families, servants, and priests, all of which lived, ate, and worshipped together, even if behind closed doors. Even Julian of Norwich was in a cell at the heart of one of the most important religious cities in England at the time, frequently visited by many, and almost certainly able to participate in the regular services in the church to which her cell was attached.

When Jesus used the analogy of the Kingdom of Heaven being like a hidden treasure that remains hidden, clearly he didn’t mean this in the literal sense that we should be hiding the joys of heaven from the rest of the world. However, in a time of lockdown and social distancing where we still don’t really know how our own local churches will start to open up, we run the great risk that we will end up doing just this. Many churches across the border in the US where things are opening up at an alarming rate are already proposing solutions like having ticketed services, or back-to-back masses with a restricted number of people. Our buildings are important and the ability to gather corporeally as well as spiritually has been a central tenet of Christian worship from its early days. We all want to get back to being able to worship as an in-person community, figuring out what our new normal is going to be; but if we prioritise opening buildings over providing ministry to our whole community, and indeed the wider world that still needs us, and instead privilege the lucky few who manage to get a ticket or who are well enough to travel across the city for worship, do we not simply run the risk of burying, hiding the Kingdom of Heaven from those who need it most right now? Bede, Byrd, and Julian are shining examples of the creative power of women and men who flourished in communities that were isolated, but they were still communities in isolation together.

Of course, we are still a community, and although we do not physically inhabit the same space, we are all in isolation together as one group, a Cathedral community connected in a myriad of ways that still pulls us together as one whole through this ever-changing and uncertain journey. The moment that we let go of this, the moment where we are divided into the ‘haves’ and ‘have nots’, the ‘cans’ and ‘cannots’, is the moment that we truly abandon our sisters and brothers to a form of isolation that we as a Cathedral community have worked tirelessly to prevent. There is already a flood of stories coming in from churches across the world, many in countries much less affected than our own, that have turned into mini-viral-epicentres and so clearly we are going to have to find the patience to continue to ride out this pandemic. Perhaps what we need to focus on most right now is the spiritual Kingdom of Heaven that has always united Christians across physical divides. As the line from the hymn reads: ‘The sun that bids us rest is waking our brethren ‘neath the western sky’. Nature itself reminds us of the unity that we enjoy as Christians and as humans, and that wherever we are and however we are separated there is a unity that binds us as one. In the face of adversity Bede and Ceolfrid found their path. So too may we and will we as one community joined together.