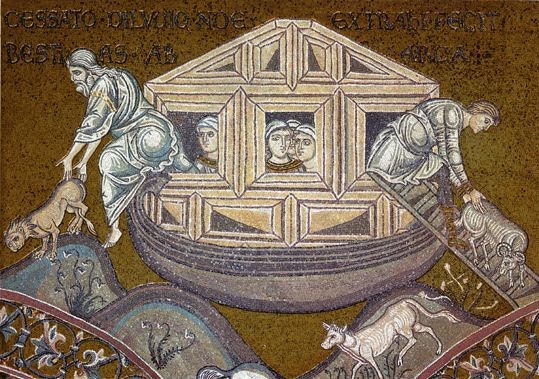 When I was flipping through a book a couple of weeks into the pandemic lock-down I found a postcard tucked inside. It was bought when Jane and I visited the 12th century cathedral of Monreale in Palermo, Sicily, and gazed awestruck at the mosaics made of gold and coloured glass depicting stories from the Old and New Testaments.

Nowadays, we tend to learn our bible stories from books, but the largely illiterate medieval population learned from the paintings, mosaics, stained glass and statues which so richly adorned even the smallest churches. Pictures, however, have not lost their powerful role as a focus for meditation on the eternal verities, a reminder that there really is nothing new under the sun, that God is our protector and saviour who over and over again has rescued humans from disasters of their own making.

My postcard is a copy of one of the 7 scenes telling the story of Noah, the flood and the ark. I have kept it beside my computer since early April as a symbol of our eventual release from quarantine. Have a look at the images in
my postcard. First, the Ark – so solid and safe, yet so confining and cramped, just like the homes in which we have all taken refuge. The floods have receded and the Ark is perched precariously on two flower-bedecked mountain tops. Noah on the left and one of his sons on the right are releasing the animals. Look how tenderly they are encouraging each timid beast to leave. The lion on the left looks just like my cat when he doesn’t want to be put outside. The goat on the right is bracing his skinny legs in protest, head hung low and tail curled abjectly round his hams. Sheltering in the Ark meant safety, but can’t have been pleasant – the goat is very thin – but he doesn’t want to leave his safe haven. Isn’t that a little bit like all of us? The cow at the bottom of the picture is much happier. Head up and tail waving, he’s prancing down the side of the hill. Then, watching what was surely a comic scene, Noah’s sons and wives are crowded together at the window, anticipating their own escape.

So, this is a joyful scene depicted on my postcard and I look at it often because it gives me hope. “Tout va bien aller – Everything will be alrightl” say the rainbow posters in the windows of my neighbours’ houses. In my picture God hasn’t yet sent the rainbow as a sign that he will never again destroy humankind, but we’ve read the story, so we know it’s coming. 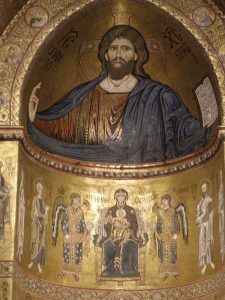 The largest mosaic in Monreale cathedral, dominating the central apse is of Christ Pantocrator, sustainer of the world, a common image in the Eastern Church. He is holding the New Testament in one hand and giving a blessing with the other. That’s another good image to hold in our minds, the majestic yet loving Christ who lifts us out of despair.

Stormy waters are powerful symbols of a troubled mind, just as still waters, the waters of comfort are symbols of peace granted us by a loving Christ. People who live on islands are especially conscious of the great power of water. Another of my favourite mosaics is the one below where Jesus is reaching out 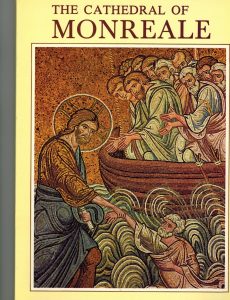 to rescue Peter who thought he could walk on water but nearly drowned in his eagerness to greet his Lord. Again, another lesson for us – well, actually two, because we are perhaps being taught the value of patience as well as learning that Jesus is always there, stretching out his hand when we are in greatest need.

The mosaics of the Cathedral at Monreale are “A testament to what human creativity can achieve, a source of hope and serenity in a troubled world even for those of no faith” (Heinrich Hall).

Psalm 27, the psalm appointed for Evening Prayer this Saturday is a good place to sum up my scattered thoughts about arks and floods, fear of being cabined and confined, yet trusting that God knows best.

Verses 7 – 9 For in the day of trouble he shall keep me safe in his shelter; * he shall hide me in the secrecy of his dwelling and set me high upon a rock. Even now he lifts up my head * above my enemies round about me. Therefore I will offer in his dwelling an oblation with sounds of great gladness; * I will sing and make music to the Lord.

Verses 17 – 18 What if I had not believed that I should see the goodness of the Lord * in the land of the living! O tarry and await the Lord’s pleasure; be strong, and he shall comfort your heart; * wait patiently for the Lord

And if you would like some watery music to bring peace in turbulent times, here is a recording of the first of the sea interludes, “Dawn”, in Benjamin Britten’s opera Peter Grimes, made by Leonard Bernstein.

Warning, if you keep listening you will encounter the frightening storm!

Postscript The dove returns with word that the waters are receding: 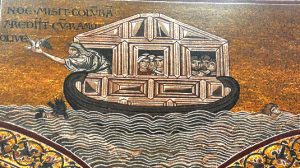