Posted on May 29, 2020 Posted By: Deborah Meister Categories: Daily Bread 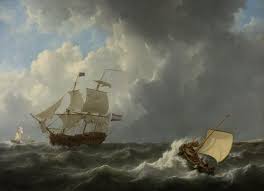 They that go down to the sea in ships, that do business in great waters;
These see the works of the LORD, and his wonders in the deep.
For he commandeth, and raiseth the stormy wind, which lifteth up the waves thereof.
They mount up to the heaven, they go down again to the depths: their soul is melted because of trouble.
They reel to and fro, and stagger like a drunken man, and are at their wit’s end.
Then they cry unto the LORD in their trouble, and he bringeth them out of their distresses.
He maketh the storm a calm, so that the waves thereof are still.
Then are they glad because they be quiet; so he bringeth them unto their desired haven.

Psalm 107, appointed for Evening Prayer today, is a true poem, immensely satisfying not only for its message of deliverance from various sorts of trouble but also for its use of language. In sections of about 8 lines each, we hear about four different groups of people in danger: “Some wandered in desert wastes / finding no way to an inhabited town”; “Some sat in darkness and in gloom / prisoners in misery and in irons;” “Some were sick[through their sinful ways / and because of their iniquities endured affliction.” Finally, we meet the sailors: “Some went down to the sea in ships / doing business on the mighty waters.”

Each of these four groups is, or becomes, lost in some way, which the psalmist describes, but by the end of the eight lines, the Lord has led them out of their trouble into safe haven. The whole psalm is wonderful in its repetition and vivid description, but the best-known lines are those quoted above, about sailors who go to sea, only to be tossed and terrified by winds and waves, but are saved when the Lord calms the storm and brings them safely home.

The King James Bible gave us the familiar English wording: “They that go down to the sea in ships.” But throughout the centuries since the psalm was written, to the life of Jesus of Nazareth, to the era of exploration, and right up to the middle of the 20th century, when air travel became common, the basic concept resonated. People have always known what it means to go to the sea in ships, face the intense danger that claims many lives, and they’ve always been grateful for reaching safe harbour.

It’s not surprising that Henry Purcell (1659-1695), living in a great age of seafaring, felt compelled to set these words to music; his is a chamber music setting for bass, alto (or counter-tenor), two violins and organ.

But the setting better known to Anglicans today is the one linked here, written by Herbert Sumsion (1899-1995). Itwas brought to our cathedral choir two years ago by Rob Hamilton, co-interim-music director, who remembered it fondly from his own days as a boy chorister. Most of us had never sung it before, but we too had fun with its evocation of calm seas, then the storm, and the sailors “staggering like drunken men” before the calm is restored again.

I asked our music director Jonathan White for some additional insights about the composer and what might have influenced him to write this piece.

“Sumsion was heavily embedded in the English choral tradition,” he told me, “spending practically his entire musical life at Gloucester Cathedral, all the way from being a chorister as a child to being Director of Music for almost 40 years. This is a late work from his career — 1979 — and we know it was written as a commission. He may well have known Purcell’s own setting of the text as this was also a period of ‘rediscovery’ of older music. Sumsion was well acquainted with composers like Elgar, Howells, Vaughan Williams, Holst. Howells and his circle were central in reviving the Renaissance composers – Byrd, Tallis, Gibbons etc – and Purcell likely also formed part of this. Britten and his circle were very interested in Purcell, for example.”

Jonathan went on to say that he didn’t know of any other Sumsion anthems quite as dramatic as this one:

“It’s a very evocative anthem, with a rippling accompaniment that is clearly designed to convey the ebb and flow of the waves, that follows a great arc, building to a dramatic climax before ebbing away again. This, of course, is a trajectory that you can see in many Renaissance works (think of the Tallis O sacrum convivium that does just that, the Palestrina Agnus Dei from the Missa brevis…) but I wouldn’t necessarily say it’s directly connected to that period of music – it could just be a coincidence.”

As I listened to Sumsion’s anthem again, I thought about how we often forget that Montreal was once a seafaring city, except maybe when we attend a concert at the Chapelle Notre-Dame-de-Bon-Secours in the Old Port — once known as the “seafarers’ church” —  and see all the handcarved wooden ship models hanging from the ceiling: offerings of thanksgiving made by sailors. A great many of our ancestors, including mine, arrived on the shores of the New World by boat, often enduring horrendous trips during which survival was not at all certain. Sometime, visit the Marguerite Bourgeoys Museum next to the Chapelle Bon-Secours, and listen to the recording of a letter written during a terrifying voyage from France to the nascent colony of Ville-Marie around 1653 (four years before Purcell was born.)

But you don’t need to be a seafarer to find a contemporary resonance in the psalm and the anthem. The arc of the text and music also mirror the uncertain journey we’re going through today — and express clearly how grateful we will be if and when the waters feel calm again, and we’re home, on dry land, in “our desired haven.”