What is our work? 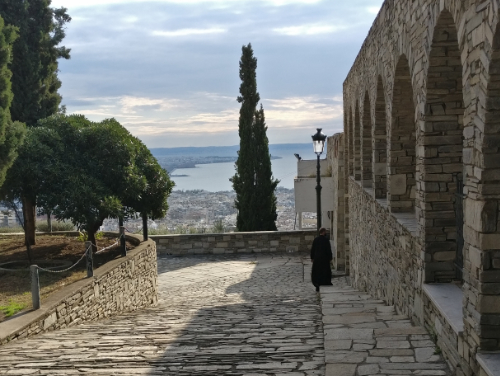 In this strange period we’re experiencing, time itself seems to have changed. The indistinguishable days go by in a blur, without the structure of our former schedules. Some of us are out of work; others are adapting to working in completely different ways; suddenly we’re faced with tasks we’ve avoided for years, or spending huge amounts of time getting food and cooking it. Ironically, although we all supposedly have “more time,”  it’s often hard to feel like we’re getting much done. It’s harder to focus, harder to stick to a routine, harder to make decisions and work effectively. Sometimes it’s even hard to sleep, or get out of bed in the morning…and there seems to be no end to this in sight.

Today, in Paul’s First Letter to the Thessalonians, we find what seems to be a difficult message. The Apostle asks the brothers and sisters of the early Christian community to “acknowledge those who work hard…to hold them in highest regard because of their work.” Frankly, we don’t even need to hear this from Paul in order to feel guilty, because we’ve lived for years in a society that constantly dins into us the value of work and accomplishment, even to the point where we are defined by those things.

But as I looked deeper, I decided this passage could be read differently, and that it contains hope and encouragement for us today.

Please come along with me to Thessaloniki for a few minutes. In 2018, my husband and I visited that fascinating city in northeastern Greece, on the Aegean, not far from the Turkish border. Thessaloniki feels eastern. It’s filled with ancient Orthodox churches built during the Byzantine period; monks and priests stride through the streets in their black robes, and across from the Church of Hagios Demitrios, where the martyr-saint Demitrius is buried, are icon-painting workshops and shops glittering with gilded icons and mosaics,  satin vestments, brass crosses, candlestands and candelabras, Eucharistic vessels, incense and prayer beads, and holy books. The scents of hot wax and myrrh pervade the churches; worshippers whose feet are muffled by the wall-to-wall rugs make the rounds of the sanctuaries, kissing the icons, crossing themselves, praying before the relics of martyrs, and lighting handmade beeswax candles that range from tiny tapers to pillars four feet tall.

When Paul arrived here two millenia ago, Thessaloniki was already a large city filled with people of many different races and cultures as befitted its location at the crossroads of east and west. It was also the seat of the Roman governor of Macedonia. The intensity of Paul’s preaching led to the birth of the city’s Christian community. After several weeks, his presence created such a disturbance that he and his friend Silas were forced to escape at night, climbing down the city walls of Thessaloniki at the exact place where the Vlatadon Monastery was later built.

Jonathan and I visited the monastery on a beautiful bright day. The remains of the ancient city walls, circling the top of an imposing hill above the sea, are just beyond the grounds of the monastery, which is still home to a community of monks. There’s a small garden and orchard; pens for chickens, geese and peacocks; a goat or two; and an ancient chapel with Byzantine frescoes on the dimly-lit walls, the unrestored figures defaced with hammer marks from the Ottoman invaders who tried to destroy all human images. Just below and to the east, there’s a spring where Paul supposedly stopped to drink, and it’s still a place of pilgrimage. I stood and looked out at the same view of the Aegean that Paul must have seen, and walked over to touch the old bricks and rocks of the original city wall. At such moments, history comes very close.

In his letter to the nascent community, Paul not only appreciates those who “work hard,” but goes on to advise these early Christians to encourage and help one another, avoid division and blame,  and try to do what is good for their own community, but also for others.

I think Paul is talking here not only about the hands-on work of providing food and shelter and other necessities, but the work of being and building community. And it strikes me that during this most unusual time, that is the work to which we are being called, too. Many people have spoken about how our cathedral’s Zoom services have, paradoxically, brought us closer to one another: we see our fellow parishioners, and the clergy, face-to-face and in our own homes; we’re meeting people we didn’t know, deepening existing relationships, finding new ways of worshipping and communicating, and gathering in small groups to talk and share, support one another, and learn. Many of us are doing this same “work” in a more secular context, too, as we explore new ways of bringing far-flung family and friends together, and do collaborative projects.

If Paul and Silas were forced to flee Thessaloniki under cover of darkness, we can be sure that life was not easy for their followers. As many have noted, there are parallels between the early Christian communities, for whom gathering was forbidden and fraught with danger, and our present predicament as worshipping Christians who cannot gather. Paul’s advice seems meant for us too: “encourage the disheartened, help the weak, be patient with everyone.” And he reminds us not to look inward exclusively, but to see the needs outside our own community — as we certainly have been doing — when he writes: “strive to do what is good for each other and for everyone else.” Regardless of how long our isolation lasts, perhaps we might worry less about how much work we’re getting done, in the traditional sense, and think more about building relationships, and the strength and resilience of our community, for whatever lies ahead.