The Martyrs’ Call to Us 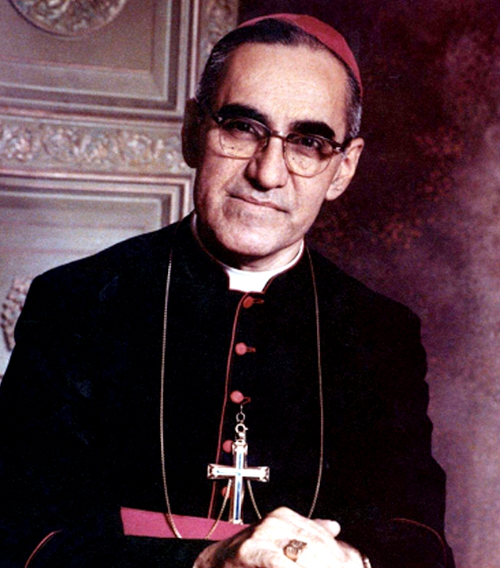 Today is set aside by the Anglican Church in remembrance of the Christian martyrs of the 20th (and 21st) centuries. The book For All the Saints in our sacristy gives short biographies of just a few modern Christian martyrs: the Burmese martyrs of the 1940s; European Christian martyrs against Nazism; African Christian martyrs killed during independence movements; North and South American martyrs for racial and social justice. One of the suggested readings for today is an address given by Archibishop Oscar Romero of El Salvador shortly before he died in 1980. I’d like to quote and reflect upon Romero’s words because I think they have relevance for us today.

I am going to speak to you simply as a pastor, as one who…has been learning the beautiful but harsh truth that the Christian faith does not cut us off from the world but immerses us in it, that the Church is not a fortress set apart from the city. The Church follows Jesus who lived, worked, battled and died in the midst of a city… It is in this sense that I should like to talk about the political dimension of the Christian faith…

Whether we see the “Church-as-fortress” metaphorically or literally, the coronavirus crisis has forced us out of our cathedral building, and into a different type of relationship as a church community within this city where we live. On our Zoom screens is an array of faces into which we look, and which gaze back at us from our widely-separated homes. Rather than being one body in one place, we are being shown in a new way that we are diverse members of one body.

Our Salvadoran world is no abstraction. It is a world made up mostly of men and women who are poor and oppressed…it is the poor who tell us what the city is, and what it means for the Church really to live in that world.

Montreal in 2020 is not El Salvador. Most of us would not say that “our world is mostly poor and oppressed” — but the current health crisis is revealing significant inequalities even in the most developed and wealthiest societies, and between those societies and the much poorer parts of the world. So instead, perhaps we can speak about “the poor and marginalized.”

Some New York State senators recently wrote: “The novel coronavirus has been called a ‘great equalizer. While it is true that anyone can contract the virus and this crisis reaches all of us in some way, it is absolutely not true that the harm it causes is distributed equally.”

In Europe and in North America, it is becoming clear that social disadvantage is a predictor of mortality. The reasons include poverty, low-paid jobs in high-risk sectors, less access to health care and supplemental insurance, greater dependence on public transportation, and other inequalities that result in poorer overall health, greater risk of infection and of more critical illness once infected. Some of these people at risk are also living in intergenerational, crowded home situations, where illness is more easily transmitted to the more vulnerable members, as opposed to the living situations of people with higher income, more space, and a wider range of options.

In the UK, and in American cities such as New York and Chicago, statistics already show that people from racial and ethnic minority groups are over-represented among the coronavirus deaths, by significant percentages. We do not yet have similar ethnic/racial statistics for Montreal, but we do know that while the early cases were greater in wealthier parts of the city where people were returning from travels, the virus is now spreading faster in lower-income areas. And the disastrous conditions in our long-term care facilities not only point to disparities in the care of the elderly vs. the regular population, and possibly to ageism in the allocation of funds and oversight, but also to the fact that the people employed to care for our elderly often come from disadvantaged populations themselves and are typically underpaid.

When asked about what has gone wrong in Canadian extended-care system, Prime Minister Justin Trudeau said just yesterday that “one of the takeaways about the extended-care situation is that those who are caring for the elderly and vulnerable are, themselves, vulnerable — often financially-vulnerable people being paid poor wages and living and working in situations that have made them vulnerable to infection.”

And it is not only in facilities for seniors that we are seeing these kinds of issues worldwide: the virus is showing the harsh reality of life in prisons, in homeless shelters or the street, in refugee camps and detention centers.

…the Church has placed itself at the side of the poor and has undertaken their defense. The Church cannot do otherwise, for it remembers that Jesus had pity on the multitude. But by defending the poor it has entered into serious conflict with the powerful…

Here in Canada, we are so fortunate to be part of a society with basic protections for all, and, unlike Oscar Romero, we do not have to battle unresponsive political systems that exist only to protect the wealthy and powerful. However, the coronavirus is shining a light on certain dark places where inequalities do exist, and where change needs to occur.

We tend to think of martyrs as people who have died for their faith, but really, they are people who lived for their faith, choosing that path willingly, and inspiring others to do likewise. Remarkable things can often come out of bad situations. On this day of remembrance, perhaps we can consider not only new ways to be a Church community committed to supporting one another, but in how we look outward. We already have a long history of helping the vulnerable and working for change through the cathedral’s Social Service Society, and more recently, the Social Justice and Environmental Action Group, and in our ongoing work and witness for sexual diversity, freedom, and rights. How good it would be if even more of us were inspired by this pandemic to advocate for the elderly, the imprisoned or detained, the homeless, the refugees, and the vulnerable and underpaid workers, and to proclaim all these missions more openly to our city and society.