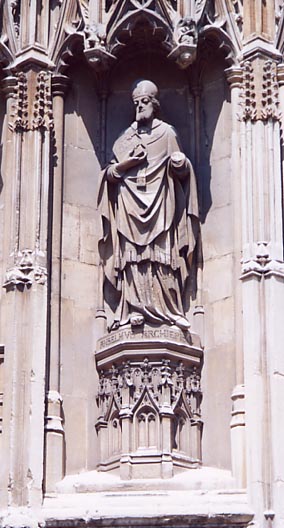 Therefore, since we are justified by faith, we have peace with God through our Lord Jesus Christ, through whom we have obtained access to this grace in which we stand

Come to me, all you that are weary and heavy-laden and I will give you rest

Today’s rubric honours Anselm, doctor of the church and teacher of the faith, who lived from 1034 to 1109. Nine centuries later CEGEP and university students still study his teaching and wrestle with understanding his ontological argument for the existence of God: (God is a being than which nothing greater can be conceived; it is greater to exist than not to exist; therefore God exists.) Because I’m not qualified, you might not be interested, and the allotted space is too small, I’m not going to delve into this thorny debate, but I do think Anselm’s life story has relevance to us today as we huddle in our homes, alone or with close family, and consider what to do in our solitude, while wrestling with how we – and people south of the border – feel about  the necessity for governments to have an increasingly paternalistic role. Many of us are also managing a closer walk with God, finding that our faith is keeping us grounded and comforted.

Anselm’s experience reflects ours in a number of ways. He was born of wealthy parents in Northern Italy but rebelled by spending his peripatetic youth as a student wandering around France, before settling at the Benedictine Abbey of Bec where he eventually became, first, Prior, then Abbot. The rule of St Benedict imposed a simple but austere life on its followers. Each day the monks followed a fixed schedule of communal prayers, private study, meditation, long hours of silence and hard work. Benedict believed “Laborare est orare” – To work is to pray, and so the monasteries became farms, wineries, hospitals and guest houses. In our different ways we have all to some extent become Benedictine monks, praying, reading or studying, and working. We are baking bread, cooking delicious meals, learning new skills and joining in prayer or study with our Cathedral community, mostly following a newly established daily routine. We even grumble about not having enough time to read.

Anselm, cloistered in his monastery at Bec, became Europe’s leading theologian, so it wasn’t surprising that William Rufus, King of England, wanted to appoint him Archbishop of Canterbury after Lanfranc’s death. Anselm was reluctant. He preferred a life of learning and contemplation to the world of intrigue, profit, and politics into which he would have to plunge as Archbishop of the richest see in England, becoming tenant-in-chief and advisor to a corrupt and untrustworthy monarch. The see had already been kept vacant for four years so that William could keep the revenues. Further complicating matters was a divided allegiance between Pope and King which led to the Europe-wide investiture controversy – by what right did a bishop or abbot hold his position? Was it conferred by an earthly or a spiritual ruler? Before becoming a bishop or abbot in England the candidate had to do homage to the king, but he couldn’t take up his position without receiving the pallium from the pope.

Making matters even more complicated, there were two popes at this period, Clement (supported by the Emperor) and Urban (supported by France, including by Anselm as Abbot of Bec). Thinking he was dying, Rufus agreed to accept Urban as pope and Anselm reluctantly agreed to be consecrated, hoping he could reform the English church. However, when Rufus recovered he refused to let Anselm go to Rome to receive the pallium from the pope. The investiture controversy heated up. Eventually in 1095, two years after Anselm’s consecration, Rufus permitted the archbishop to go to Rome, but as soon as he left, the king seized the lands belonging to Canterbury. Anselm spent 4 years in Europe, attending church councils and writing theological treatises. When Rufus was killed in a suspicious hunting accident Henry I invited Anselm to return. The relationship between king and archbishop soon soured because Henry insisted on his right to invest the higher clergy with the spiritual symbols of their office, and Anselm once more went into exile. The dispute was resolved at the Synod of Westminster in 1107 when Henry, a reasonable and intelligent monarch, agreed not to invest bishops and abbots with the ring and crozier, symbols of their office, provided they did homage to the king before being instated. Anselm was thus able to pass the last two years of his life peacefully in Canterbury.

Anselm’s story illustrates how a good man can stand up to a corrupt and venal king and also how a good man and a good king can cooperate and achieve compromise. Anselm was steadfast in his faith and in his principles. He is famous for his motto “fides quaerens intellectum” – faith seeking understanding, which was the original title of his Proslogion, the famous book in which he set out his proof for the existence of God. Anselm is not seeking to replace his faith with understanding. Rather he is describing “an active love of God seeking a deeper knowledge of God” (https://plato.stanford.edu/entries/anselm/) The psalm and the readings appointed for today, quoted at the beginning of this article, are commentaries on the the life and teaching of Anselm, a man of deep faith and unshakeable principles whose life speaks to us at this time.  We too sometimes have to confront wrong-headed politicians; we too need to examine and confirm our faith;  we too long for quiet spaces and a monastic routine of work, prayer and study. 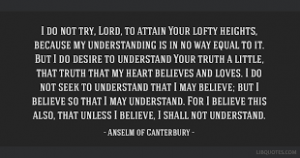