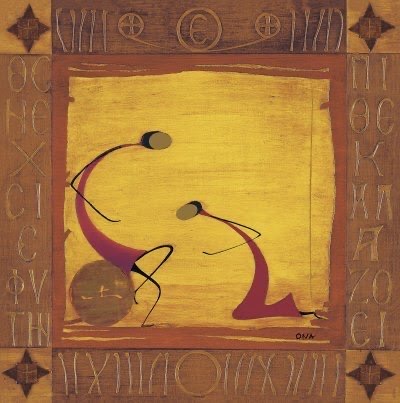 From there he set out and went away to the region of Tyre. He entered a house and did not want anyone to know he was there. Yet he could not escape notice, but a woman whose little daughter had an unclean spirit immediately heard about him, and she came and bowed down at his feet. Now the woman was a Gentile, of Syrophoenician origin. She begged him to cast the demon out of her daughter. He said to her, “Let the children be fed first, for it is not fair to take the children’s food and throw it to the dogs.” But she answered him, “Sir, even the dogs under the table eat the children’s crumbs.” Then he said to her, “For saying that, you may go—the demon has left your daughter.” So she went home, found the child lying on the bed, and the demon gone. (Mark 7:24-30)

The gospel reading appointed for today’s Evening Prayer gives us this seemingly odd confrontation between Jesus and an unnamed Syrophoenician mother. She approaches him in faith to beg for the health of her daughter. But Jesus’ response may catch us off guard. We are accustomed to him healing those who approached him but he rebuffs her with “Let the children be fed first, for it is not fair to take the children’s food and throw it to the dogs.” What a strange thing to say. Not only is he not healing her daughter but he seems to be insulting her as well. She is undaunted and replies with “Sir, even the dogs under the table eat the children’s crumbs.” Her unshakable faith is acknowledged and her daughter is healed.

This episode is about much more than healing for it speaks to an ongoing debate within the community that the author of Mark is writing for. Tensions were high around the place of Gentiles within the community of believers.  Was Jesus’ message only for the chosen people or did it include Gentiles? This passage looks to address the controversy. It clearly places Jesus in Gentile territory and his response to the Gentile woman’s plea for her daughter would seem to say that Gentiles have no place in the God’s kingdom, but the mother’s wise reply shows otherwise. God’s love has no boundaries. and any attempt to limit it is a purely human invention.

We are all experiencing events right now that have thrown us for a loop. Just weeks ago we were celebrating Christmas and our biggest problems here in Montreal were how the Habs were seeing yet another season slip through their hands and endless construction. Now we worry about a virus that we don’t understand and its very real threat to our day to day lives.

Uncertainty about the future has tapped into our primal anxieties and brought out the best and worst in human nature. People reaching out to help neighbours, finding new ways to be community, and practicing physical isolation out of a concern for the wellbeing of each other are all ways we have adapted quickly to extraordinary events. At the same time, there are those who have hoarded supplies unnecessarily, ignored calls to isolate, and looked for someone to scapegoat.

At a time when we are called to be even more aware of our “oneness” in community, our fears will try to divide us. We are all one in God’s creation and must not let go of that truth. We will get through this stronger if we trust in God and stand together. Voices of those who would seek to divide us and spread fear of the unknown have no place in God’s kingdom. To that end I am reminded of a poem by Edwin Markham entitled Outwitted.

He drew a circle that shut me out —

Heretic, rebel, a thing to flout.

But Love and I had the wit to win:

We drew a circle that took him in!