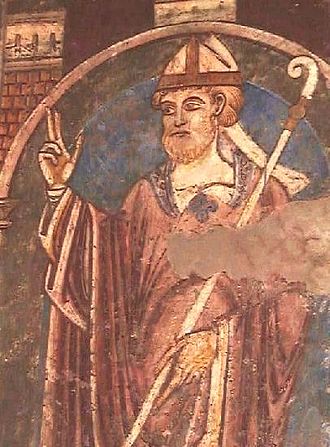 When Deborah asked me to write something on this blog for today, I took a look at the lectionary, and two things caught my attention. The first was that today, March 20, is the feast day of St. Cuthbert, Bishop of Lindesfarne, who turns out to have some connections to our present predicament. The other was Psalm 91, and psalms in general — but more about that later after we visit the saint.

Cuthbert began his life as a shepherd in Northumbria, a medieval kingdom in what’s now northern England and southern Scotland. He decided to become a monk in 651, after having a vision on the night that St. Aidan died — Aidan was the founder of the great Benedictine monastery at Lindesfarne. Cuthbert first entered the monastery of Melrose, and in 661 the community was struck by the plague. He survived, but the prior died, and Cuthbert was chosen to succeed him. After that, he traveled through the countryside helping plague victims, and gained fame as a worker of miracles.

But, perhaps true to his shepherd-nature, Cuthbert had always felt called to solitude, and five years later he retired to the island of Inner Farne where he built an oratory and cell, and lived as a hermit, becoming increasingly renowned for his holiness. He was finally prevailed upon to become Bishop of Lindesfarne in 684, but died just three years later. He was buried at Durham Cathedral, and became the most important medieval saint of Northern England.

In addition to being no stranger to the plague, Cuthbert would have been very familiar with the psalms. Benedictine monks pray the psalms continuously, day and night, sometimes going through the entire psalter in two weeks. So he certainly would have known Psalm 91, which is appointed for Evening Prayer today. It speaks of God as our Refuge, and these verses must have stood out to Cuthbert as they do to us today:

and under his wings you will find refuge;

his faithfulness is a shield and buckler,

or the arrow that flies by day,

or the destruction that wastes at noonday.”

There’s something comforting in the thought of St. Cuthbert walking through the rugged countryside and peasant settlements of Northumbria, or sitting alone in his cell, reciting psalms like this one to himself, during a time of great uncertainty and danger so long ago. While what we’re facing is unprecedented, that’s because our own “known world” is so large and interconnected. For medieval people, plagues and wars and natural disasters completely filled and upended their “known world” too.

Like you, perhaps, I’ve had an ambivalent relationship with the psalms. Some are favorites that help me go to sleep when I’m worried, some are beautiful songs of praise and poetry — but I’d rather ignore the angry, vindictive, violent ones. As a singer, I’ve appreciated the care and detail that our music director, Jonathan White, has brought to our singing of the psalms this year. It’s gotten me to slow down and pay real attention to the words, and to understand that the choir is praying the psalms for and with the congregation, so it’s important to do that as well as we can.

Now we won’t be singing for a while, unfortunately, but I’ve found that some of the psalms are speaking to me in a new, more immediate way. They are so human, expressing such a range of emotions about the beauty and wonder, unfairness and uncertainty of life. It helps me to see that ever since the psalms were written, human beings from the exiled Jews to Jesus Christ, from St. Cuthbert to the people with whom we share our pews, have found an echo of their own experience in these words. We aren’t as alone as we sometimes feel.