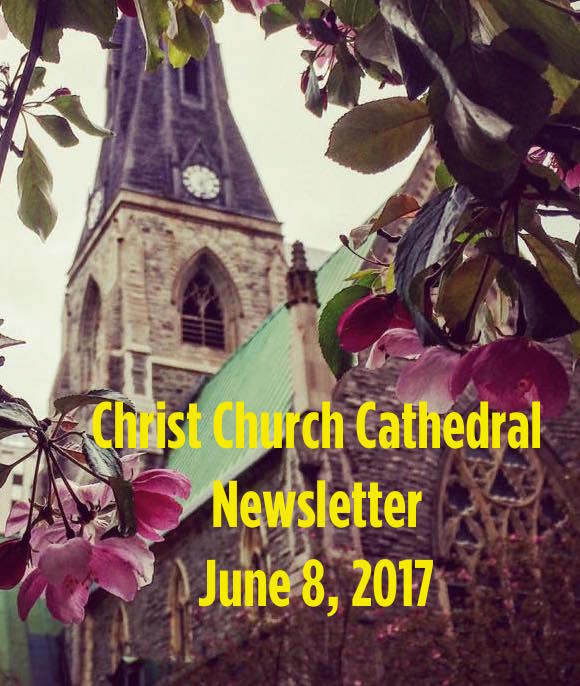 Dear Friend of the Cathedral

Our recent bulletins have become so action-packed that there has been no room for notices. Consequently, Tania is hoping you will all pay close attention to information in the newsletter. You can see a summary of the notices at the end of the letter.

Last Sunday’s service celebrating Pentecost began with a reading “in tongues”. Two of the languages were clearly French and English, but some people asked about the other two. Marian was speaking Arabic, and Yevgeniya Esperanto, a language she and Joel frequently use at home. I can’t reproduce the Arabic , but here is a snippet of Esperanto from the reading – aŭdas ilin parole en niaj lingvoj la mirindaĵojn de Dio (we hear them speaking about God’s deed s of power)

If you were in the cathedral last Friday morning you would have encountered two classes of Grade 5 students from Edinburgh School, along with their teachers and monitors. They were on a school trip which took them to a mosque, then to the cathedral and finally to a synagogue. They were wonderfully attentive and Joel, Patrick and I had fun trying to initiate them into Anglican theology, the story of the building and the riches of our organ – all in 45 minutes because the group was late arriving. The children were fascinated by Joel at the altar wearing the vestments of a priest while he demonstrated the communion. He focused his remarks about Christian theology on the two great commandments and highlighted some differences between Anglicans and Catholics. After about 20 minutes of talking and a short burst of lively organ music, we divided the children into two groups. One group went up into the organ loft with Patrick while the other group were given a scavenger hunt which allowed them to tear round the cathedral at top speed. Then the groups changed place. When the group left the organiser thanked us for our warm welcome and said that they had enjoyed themselves so much she was planning to bring 5 more schools next year. Who would like to sign up to run one of the sessions? As Patrick observed, welcoming visiting groups is a very important outreach. Who knows, perhaps one of the children will grow up to be a priest, or a historian or an organist! Thank you, Joel and Patrick, for your leadership. 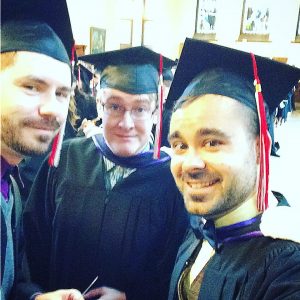 Last week was an exciting one for our theology students. Tyson Røsberg received his Master of Arts degree in History from Concordia University on Monday and his Bachelor of Theology from McGill on Tuesday. Congratulations Tyson! (Is this double graduation a record?) Tania Lesack also received the Bachelor of Theology, and so did another Anglican in our diocese, Jonathan Widdell.

We said a temporary good-bye to Mary Eileen Earle last Sunday. She was on her way to Washington to be trained for a new post in the American Embassy in Kabul. Her job dealing with refugees will probably begin in August. Our prayers go with her. She has promised to keep us updated.

This Sunday, Trinity Sunday, promises to be pleasantly and magnificently busy. It looks as if the weather will be good, so the picnic will take place as planned outside the cathedral at 11:30. There will be hot dogs and home-made cakes (baked by Peggy Simpson). If you want to make a contribution towards a more balanced menu, please bring a salad. George Deare will be organising some games.

Later this Sunday, Pain, partage et prière meets in Fulford Hall at 2 pm. There will be a beautiful traditional choral evensong at 4 pm with music by Tchaikovsky and Messiaen as well as a setting of the Magnificat and Nunc Dimittis by choir member Elizabeth Ekholm. Elizabeth is also the composer of the anthem being sung at that service. Finally, at 6 pm, there will be a bi-lingual evening Eucharist with contemporary music. 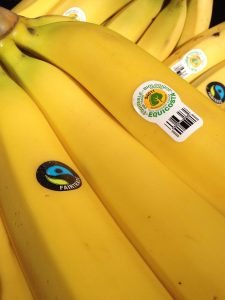 Sunday, June 18, Father’s day, is also busy. Lisa Middlemiss wants us to know that “at the fair trade kiosk after the 10am service the fair trade working group will be featuring fair-trade certified organic bananas generously provided by Canada’s leading fair-trade produce company, Equifruit – They say that organic bananas are a little sweeter and the taste creamier than conventional bananas but Equifruit is in the business of the sweet taste of social justice! Equifruit works with cooperatives of small producers farming collectively, notably APPBOSA in Peru and El Guabo in Ecuador. Equifruit fair trade bananas are available at IGA and Rachelle-Bery in downtown Montreal, among other locations across the Island.  Join us in celebrating Equifruit on Father’s Day!”

At 12:45 on the 18th , Francophones from other churches have been invited to join our congregation for an Intercommunity French Eucharist and Picnic. RSVP before June 9 to the Cathedral office if you are coming to the picnic  Célébration de la Parole et de l’Eucharistie multi-

On the subject of food, some of you might be interested to look at the newly published Directory of food resources for low income people of Greater Montréal: 2017. It serves both as a guide for public use and as a tool for social workers and organizations helping people in difficulty in Greater Montréal. It lists over 400 organisations providing food resources with a detailed description of their services

The print version is available if you fill out the following form (also available in French):

For the first time and to allow greater access to resources, a full pdf version of the directory is also available on their website for free:

Some of you may remember a sermon preached in the cathedral by Michael Lapsley, at an event that we hosted. He is an Anglican South African priest who was very involved in the anti-apartheid movement and lost both hands in an attack resulting from his activism. A strong proponent of restorative justice and founder of the Capetown based Institute for Healing of Memories, he will be moderating a workshop in Pierrefonds thisOctober which is being organised by the Centre for Services in Restorative Justice/ Le Centre de services de justice réparatrice (CSJR) The centre works to promote a restorative justice philosophy and organizes activities with the goal of helping those touched by criminal activity reclaim power over their lives. http://www.csjr.org/en/  You can find information about the workshop and a link to the registration form here http://www.csjr.org/en/2017/06/06/healing-of-memoroies-workshop/ Please note, space is limited so they are asking people to register soon, even though the event is in October

“No news … which is not good news. Our family’s papers, approved by provincial and federal immigration departments, arrived in Lebanon in July 2016. During Trudeau’s initial acceptance of 25,000 Syrian refugees, the number of screening officials was much increased, but since then they are back to previous levels, and the average time for processing has reverted to 11 months after the papers arrive. Because our family does not live in a refugee camp but depends on relatives, they have missed appointments when they could not arrange transportation at short notice. If this unknown is frustrating for us, imagine what it could be for this father, mother and three children. 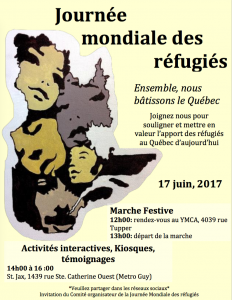 In order to prepare ourselves to receive these newcomers to Canada, Action Refugiés recommends that we think about what we can and might expect, about what they expect and hope for, and how we can be sensitive to their needs so that we can empower them to make decisions for an independent life here. At Forum on June 20, a time has been allotted for discussion of cross cultural sensitivity, and of how sponsors may react to the recipients’ mixed feelings about dependency on strangers in a different language and culture. Sponsoring groups that have received newcomers have told us how important it is to be ready and flexible and to develop teams of volunteers: e.g. education, finance, links with government departments, social support, material furnishings etc. . One group even had a Childrens’ Committee. We are not yet ready, except financially, and we have to get ready.”

Saturday June 19 is World Refugee Day (JMR). Various Montreal organisations including Action Refugiés Montréal, are organising a symbolic march along St Catherine starting at 1 pm at the YMCA residences on Tupper Street near Atwater and finishing outside St Jax. The march will celebrate the courage and resilience of those who have fled their country.

If you participate in the JMR march you might enjoy relaxing afterwards at the weekly Oasis concert starting at 4:30. This week it features a concert performance of extracts from Rossini’s opera Il barbiere di Siviglia

The cathedral book group is reading Middlemarch by George Eliot over the summer. We have been able to borrow a set of “books in a bag” from Westmount Library. I will have them in church on Sunday if you’d like to borrow one. We only have a limited number, so people planning to come to the discussion in September will get first pick!

Finally, as promised, here is a quick check list of notices.

In honour of Trinity Sunday, some favourite lines from one of John Donne’s Holy Sonnets. The whole poem is here.

Batter my heart, three-person’d God, for you
As yet but knock, breathe, shine, and seek to mend;
That I may rise and stand, o’erthrow me, and bend
Your force to break, blow, burn, and make me new.

If you want to receive the newsletter by email, and with it various additions (Forum minutes and reports; posters, photos; etc.) Simply send your coordinates to the cathedral office.