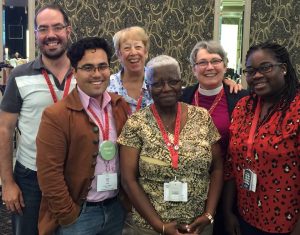 I am just home from my first time at General Synod. The Montreal delegation included Mrs. Valerie Bennett, Mrs. Susan Winn, Ms Elodie Lambert, the Rev. Robert Camara, and the Rev. Nicholas Pang. The Rev. Annie Ittoshat attended as part of the Indigenous Peoples’ (ACIP) delegation and the Rev. Dr. Karen Egan was there as a member of the Council of General Synod and the representative of the Montreal Diocesan Theological College. The Rev. Professor Patricia Kirkpatrick was there for the Companions of the Diocese of Jerusalem. I was honoured to be accompanied by these fellow members of the Diocese of Montreal.

While we gathered with some trepidation and hope over the vote to explicitly allow for the marriage of same sex couples within the church, the meeting of General Synod was much more than that. It was a wonderful meeting of delegates and leaders and partners of the Anglican Church of Canada, surrounded by much prayer and careful planning. We asked God to guide us and we meditated on Isaiah chapter 43 all week, especially the theme of the Synod from verse 10, “you are my witnesses”. A verse which stuck out (ominously or hopefully) to some was verse 19: “Behold I am doing a new thing; now it springs forth, do you not perceive it?” As I reflect on the whole week, I believe that God was at work well above and beyond our individual and corporate agendas. I have come away with a real sense of the diversity and interests and concerns of the members of our Anglican Church of Canada and of the love and passion that they bring to it in the service of Christ. The presence of many indigenous and Inuit Anglicans, lay, clergy and bishops was notable, with simultaneous translation available for those who needed it. Mark Macdonald, the National Indigenous Bishop, and Lydia Mamakwa, Bishop of the Indigenous Spiritual Ministry of Mishamikoweesh were present along with Bishop Barbara Andrews from the Territory of the People and Bishop Adam Halkett from the Diocese of the Arctic. The Indigenous led Eucharist on Sunday began with smudging with sage grass, and with drums, and the singing was unaccompanied, as is the case in most indigenous congregations. The first two readings were in native languages with English printed on the screen. That afternoon we heard about the work towards the self determination of Indigenous people and in the evening Bishop Mark led us joyfully in a Gospel jamboree. All of this was live streamed on the internet.

We were seated at tables with people from other dioceses and we met in “neighbourhood groups” for some discussions. It was interesting (and sometimes difficult) to hear the points of view of others but most of us worked very hard to listen respectfully. We were guided by the commandments to love God with everything we have, and to love our neighbours as ourselves. We were reminded that as members of one body we have no right to say “I have no need of you”. Indeed, Fred, our Primate read a large portion of 1 Corinthians chapter 12 as he tried to help Synod move into a holy and graciously mannered frame of mind. It was a profound spiritual exercise for many of us as we attended to the Holy Spirit and wondered how things would turn out.

When the vote took place to amend the Canon on Marriage to allow for same gender Christian marriage, over 70% of delegates voted in favour. Many of our LGBTQI members of the church and their friends were very hopeful that we could move towards their full inclusion in this sacrament. There were also strong voices present hoping and praying for the motion to fail. We needed a two-thirds majority among each of the orders of bishops, clergy and lay people. As you know, there was a problem with the electronic voting set up and the vote initially failed before it was found on Tuesday to have passed after all. What happened in between the first result Monday night and the final result on Tuesday may turn out to be really important for the future of our church.

The difficulty of belonging to a church where not everyone thinks the same as us was one of the things I take away from this General Synod. All of us, in turn, experienced disappointment and agony as the Synod’s decision went the opposite way that we wanted. On Monday night, the Montreal delegates and I sat in stunned silence and pain as the result sank in and as our LGBTQI friends, at Synod and online, reacted to the news. We were aware of so much pain and feelings of rejection. We wondered how the church could survive such hurt. It was really difficult to pray that night and the next day, and to stay in community with those around us who had spoken against the motion. Still, this was not my first experience of one part of the church excluding another, and I remain committed to being in the Church with all who are called to love and serve the Lord Jesus Christ. As I said to my ‘neighbourhood’ small group, “when I got into the waters of Baptism, I did not negotiate about who else would be in there with me.”

Ephesians 4: 4-6   There is one body and one Spirit, just as you were called to the one hope of your calling, one Lord, one faith, one baptism, one God and Father of all, who is above all and through all and in all.

How we behave as disciples of Jesus Christ matters a great deal. I could not doubt the sincerity of all those present whether their reasoning was along the same lines as mine or not. I was aware of that as the media swarmed us on Monday night and then again on Tuesday night as Synod concluded. What kind of witnesses of Christ will we be?

I have sought the counsel of my bishop brothers and sisters and we have been encouraged to hear from the chancellor of the Anglican Church of Canada that the Marriage Canon does not explicitly forbid same gender marriage. The Diocese of Montreal has permitted the Christian blessing of same gender civil marriage since Diocesan Synod 2008. While the General Synod Marriage Canon cannot be changed until the second reading in 2019, I am prepared, on a case by case basis, to allow clergy who ask me for permission, to officiate at a same gender Christian marriage. I expect every couple who is to be married in the church to receive appropriate marriage preparation and support in their marriage. The purpose of Christian Marriage, as with all of the Christian sacraments, is for the deepening of the discipleship of the persons involved. The whole Church is challenged to be a witness to the Gospel of love and grace.

May the grace of our Lord Jesus Christ abound in the Church!