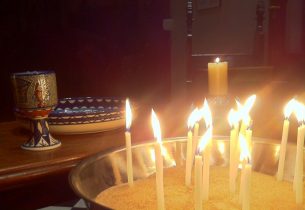 What does sin mean today for us?

Do we take time to really reflect on our sins or isn’t much more than that little prayer we recite at each service?

We live in a society where almost everything is permitted. Do we feel “sinless” compared to many others?

If I am a good and responsible citizen, a faithful spouse, a good parent and hard worker, how can I be a sinner?

Are we trying to avoid feeling guilt? We do not talk much about guilt either but guilt is not necessarily negative, especially if it pushes us to action.

Could sin be larger than the individual sins we commit, consciously or not?

In an age of globalization, sin cannot be understood in purely personal terms. Sin is both individual and deeply systemic, distorting and corrupting our relationship with God both collectively and individually. How so?

Are we purchasing goods or holding stocks from international corporations that exploit the labour of women and children in developing counties?

Do we favour walking, bicycling, collective transportation and the transit system, or not? Do we use certain tools or devices without thinking of their impact on pollution, depletion of mineral resources or global warming? Do we offer a sacrifice of money and labour to the god of consumer goods and self-gratification? Because constantly offering dead animals to fill the need for our atonement is akin to gathering inanimate objects to fill the needs for our self-esteem.

As a society, our conscious and unconscious prejudices and biases of race, gender, and sexual orientation have sustained a system of social discrimination that can throw our neighbours, family members, friends, and colleagues into the depths of despair and hopelessness. Violent acts occur thousands of times daily, not just in the Middle East, Syria, Burundi or Israel, but also here in schools, universities, at work, when it is not at home.

In a society where greed and lust are often legitimized, sin is intricately linked to subtle yet devastating public attitudes towards other races, language groups, genders, age groups, and political affiliations. Our sins today often have a multi-relational dimension, and as we start to understand them, we may feel overwhelmed, helpless. We may feel at an impasse when trying to solve the problems of sin. The text in Hebrews tells us that we can be saved only by something that transcends the forces within us, and that is God’s radical love revealed by the crucified Christ.

By the power of love, by shedding his own blood on the cross as a sacrifice, Christ has solved the problem of sin once and for all.

Talking about sin is definitely taboo, but talking about it is the only way we can remind ourselves how much Christ loves us, how God so radically loved humanity so that He sent His son to solve the problem of sin.

Talking about sin is also to talk about suffering, about the journey to the cross, and our journey this week.

As individual believers, churches, and institutions, we need to talk about and be aware of the sinful reality of our world, in order to be able to participate in the ministry of forgiveness. Forgiveness is not only to say: “I am sorry”, to offer money or make amends. The ministry of forgiveness implies that we act as peacemakers, caregivers, and witnesses to God’s grace and justice.

A good example of this is the situation with indigenous people. After having heard the truth, having offered our excuses to the First Nations in Canada and paid some money in compensation, what are we going to do about reconciliation? It is only at this point that our ministry of forgiveness starts. Forgiveness cannot only be spoken words and prayer; it has to be also concrete actions. What will we do to make it right for the indigenous people? Following Christ’s sacrifice, we no longer need to offer sacrifices but as believers we can and ought to offer services that will lead to healing and possibly to true equality and transparent relationships.

Being aware of the sinful reality of our world, we ought to participate in the ministry of forgiveness, actively working for political changes, working among refugees, in shelters, in every place where humans come into conflict in our world.

May God show us, both individually and collectively, the way to journey in the ministry of forgiveness. Amen.