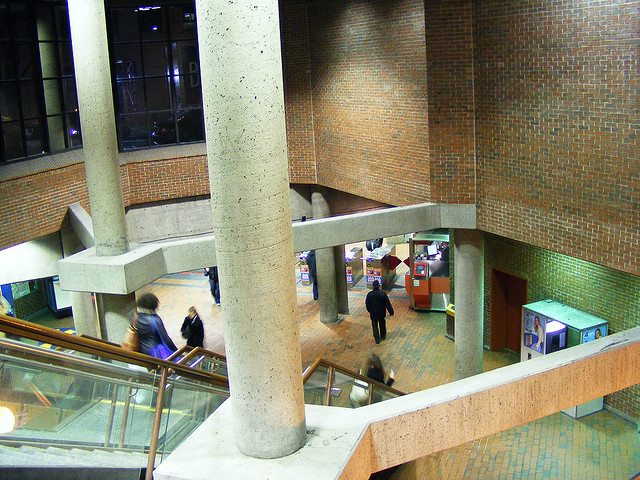 I leave my home to go to work before the sun rises, and most of the people I encounter are huddled against the wind or trying to drink coffee without either missing the bus or spilling it all over themselves. For the most part, we look at the ground, we hurry along without seeing anything, without meeting one another’s gaze, without saying hello.

Every morning I walk into Snowdon metro station around 6:30 and see the young man who cleans the escalators. He rides up and down with his mop, getting the grime off the surrounding surfaces. Most people rush down the escalator without noticing him. He is a familiar figure, largely silent and unobtrusive, easily overlooked as he does his job. Whenever I see him, I am reminded that this is ordinary.

The church community I grew up in called the space between liturgical seasons Ordinary Time. On our yearly calendar-wheel, you could tell which bits were Ordinary because they were colored green. This liturgical non-season is named after the ordinals of the church calendar – the numbered weeks of the lectionary as they are slotted around the major festivals and seasons that shape the year in the Western Christian tradition.

History of the name aside, I always thought these sections of the year were so named because they were, well, ordinary. Boring, even. They’re the bits left over after you take out all the good stuff. We are caught up in the anticipation of Advent, the joy of Christmas, the longing of Lent, the drama and sorrow of Passiontide, the sweet culmination of Easter, the fire of Pentecost. Ordinary time is when we hear the stories that didn’t make it into the important parts of the year, when we wear boring vestments, and fall asleep drawing endless pictures of Noah’s ark, and start planning the music for next year’s Easter Vigil during the sermon.

It wasn’t until I was much older that I began to appreciate Ordinary Time. Because communal worship has always been such a big part of my life, I am largely caught up in the movement and motion of the liturgical year as it pulls me along. It is emotional, and intense, and consuming. It is life-giving and challenging. It sews in me doubt, and fear, and conviction, and yearning, and devotion. It is the burning fire of my faith.

In Ordinary Time, the church holds me in stillness. Sometimes I feel stifled and stir-crazy because I want something to be happening. But so much of my life and my journey with God is actually in this stillness, the small silent gestures, my everyday communion with the people around me, the gentle nourishment of God feeding me in ways that are so obvious I usually overlook them. It reminds me to look up, to say hello to the stranger, to smile in the darkness of early morning, to notice the world around me that I often don’t take the time for.

Ordinary Time is like the young man who cleans the metro station as we go about our lives around him. It’s doing something so essential that we don’t see it. It’s doing something that we think of as being subservient to something greater, and so it is too easy to ignore. It’s giving us the space we need to grow in our relationship with God, so that when we re-enter the cycle of the church year with the next major season we encounter God in new and deeper ways, and experience our faith alongside that small, still voice.