Posted on May 19, 2015 Posted By: Vivian Lewin Categories: Latest News, Prayer and Spirituality

[A talk by Beth Adams given on Tuesday, May 12, 2015, to introduce Contemplative Prayer at Christ Church Cathedral]

This spring, the cathedral community is grappling with questions about war and peace during a special series of presentations and discussions. War and violence are present throughout the Bible and our liturgy: they are present in the psalms, in our hymns, and in our weekly prayers for the world.

Nevertheless, war is a topic that tends to seem “out there” to many of us in North America, both because “somewhere else” is where the wars are taking place, and because most of us do not feel directly involved in deciding when they will begin or end, in carrying them out, or in bearing their most devastating costs.

However, religion often gets blamed, including Christianity. Someone has probably said something like this to you, after finding out you go to church: “I don’t want to have anything to do with religion. Religion is responsible for most of the violence in the world.”

Karen Armstrong’s most recent book, Fields of Blood, addresses this accusation directly. In addition to pointing out the weaknesses in this popular but simplistic view, she says that “blaming religion allows Westerners to ignore the essential role that violence has played in the formation of our own societies — and the essential role that our societies have played in seeding violence abroad.”

Are these questions about violence political and theological only? What does war have to do with contemplation and our wordless, silent practice? 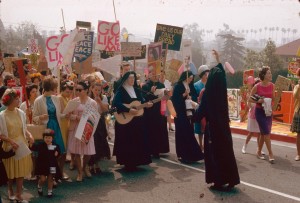 Thomas Merton, writing from his silent monastery during the nuclear arms race, civil rights struggle, and the Vietnam War, was deeply concerned with both the monk’s personal responsibility, and that of the Church at large, toward the future of humanity. He was very aware that other Catholics, like Dan and Tom Berrigan and Corita Kent [shown here leading a Mary Day protest in LA], were opposing war at great personal cost while he lived in relative safety and security at Gethsemani. He also examined his own role as one building block in the various societies to which he belonged, including his own monastery, his religious order, the Catholic Church, and the United States.

I want to quote two statements from his book Conjectures of a Guilty Bystander. The first is from Merton himself:

The second is a quote from Danilo Dolci, an Italian social activist who became known as “the Gandhi of Sicily” because of his non-violent opposition to poverty and the power of the Mafia. Dolci wrote:

“To resign oneself to doing or letting others do what one is not profoundly convinced of, and not to seek coherence at the highest level of one’s carefully examined conscience, is to fail to lead a true life.”

Most religions would say that they are about “trying to lead a true life,” and we can all point to ways in which that has succeeded and ways it has failed.  But if contemplation is anything at all, it should help us go to this core of religion: a place where each of us deliberately faces is or her own conscience.

It is an extremely difficult thing, as Merton goes on to suggest, for an entire society to refuse to suspend its conscience, which is why we have to begin with ourselves as individuals. If we pay attention to the inner dialogue that inevitably comes up during days and months and years of meditative practice, each one of us will come face-to-face with our own violence. We will have listened to hours of mental arguments in which we’ve defended ourselves, honed our arguments, confronted the attackers who’ve accused us unjustly, tried to win petty battles and major conflicts alike. If we are honest in our examination of conscience, not one of us can deny our own tendencies toward wanting to win, and even wanting to crush our opponent and glory in our own righteousness and victory. Unfortunately, it is human nature.

No doubt some of this internal violence has spilled over into action in our daily lives. But the beauty of contemplation is that, over time, it gives us space to choose how to act, if we act at all. We need to be, in Dolci’s words,” profoundly convinced” before we act, and always to “seek coherence.” We cannot espouse love as a mere theory; we have to seek to incorporate it in every aspect of how we live our lives. If we don’t, those lives will simply mirror what we see in the world all around us, and we will continue entering into conflicts that are based on theories and ego, instead of self-understanding and deeply-lived truths.