Take the crucifixion and give it a new home [meditation talk] 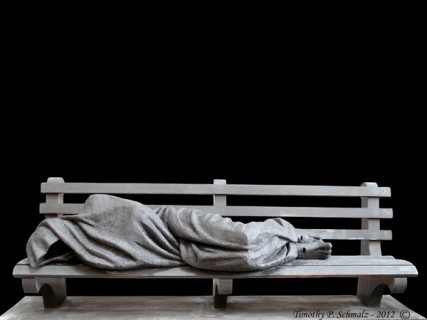 29 ‘Woe to you, scribes and Pharisees, hypocrites! For you build the tombs of the prophets and decorate the graves of the righteous, 30 and you say, “If we had lived in the days of our ancestors, we would not have taken part with them in shedding the blood of the prophets.” 31 Thus you testify against yourselves that you are descendants of those who murdered the prophets.

37 ‘Jerusalem, Jerusalem, the city that kills the prophets and stones those who are sent to it! How often have I desired to gather your children together as a hen gathers her brood under her wings, and you were not willing! 38 See, your house is left to you, desolate.* 39 For I tell you, you will not see me again until you say, “Blessed is the one who comes in the name of the Lord.”

I’ve always liked the long elongated figures of the paintings of El Greco.  For paintings from the beginning of the 17th century they have always seemed so modern to me –with their use of colours and distortions…

One such painting is a painting of the crucifixion – the cross fills the whole painting, the body of jesus is contrasted against a black sky with only the outline in chalky white of the city skyline in the bottom third of the painting.  The figure of Jesus is long and stretched out, a pale and unearthly colour, with wisps of angels in the black. 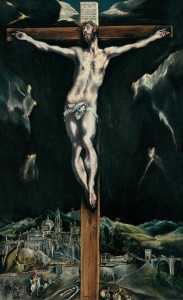 And then, when you look harder at the picture you realise that the skyline in the lower third of the painting is not Jerusalem at all  – there plain for all to see is the city of Toledo, the one time capital of Spain.  Was El Greco just being cheeky ?  was he saying that Toledo is the new Jerusalem ? or was he just doing what countless medieval painters had done before.

There is another painting of the crucifixion 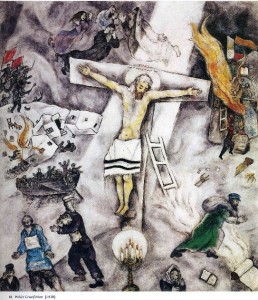 – this one by Marc Chagall – which portrays Jesus as a hasidic jew with ringlets, prayer shawl and all – and the horrors of pogroms, the holocaust and anti-Semitism all around. 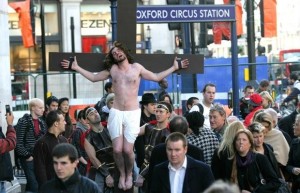 and the statue by the Canadian artist Timothy Shmalz 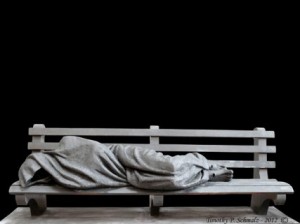 – of the crucified Christ lying on a bench dressed as a homeless man.

All of which serve to remind us that it is not enough as a living spiritual community merely to survey the wondrous cross – as if it were simply a piece of history –  rather, we must take the crucifixion and give it a new home in our own day and the in towns and cities where we live.

Which raises for us a challenge, for I believe many people in Toledo in the 17th century, and in Berlin in the 20th Century and in London and Toronto in the 21st century know about crucifixion and suffering.  They know all too well that that a cross rises above our lives and the weak and vulnerable hang upon it.  But they do not see – as El Greco did – the figure of Christ.

And – if I may be so bold as to say it –  perhaps there are many inside our churches who gaze upon the sacrifice of Christ upon the cross – but do not see the connection with the suffering of those around them today.  The story is fixed in the past, – the city-scape in the background is an idealised version of a fictional 1st century Jerusalem not the place where they are, the place where we are.

As we sing our old songs, and retell this old old story – so familiar to us – let us look for our own lives and peoples and cities and nations in the picture.  The victim and the soldier, the mother and the friend, the criminals and the innocent, the by-standers and the careless :  and let us survey the crucifixion of Jesus – the wondrous cross –  in the streets of Montreal and in our own lives, so that we may know the glorious resurrection when it comes.