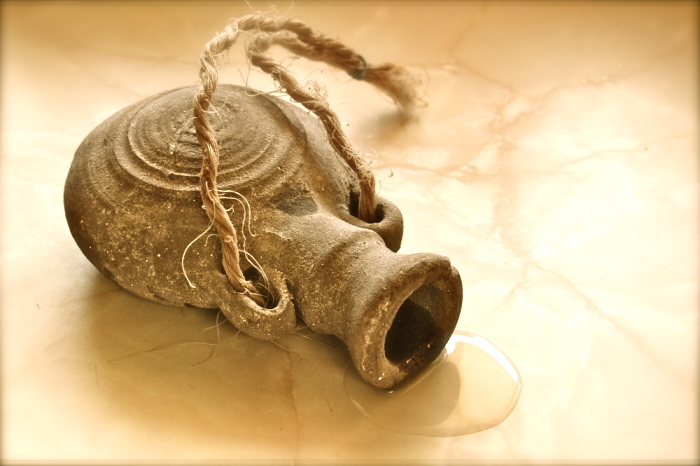 A Reading from the Holy Gospel of Saint Matthew, Chapter 26

6 Now, while Jesus was at Bethany in the house of Simon the leper,7 a woman came to him with an alabaster jar of very costly ointment, and she poured it on his head as he sat at the table. 8 But when the disciples saw it, they were angry and said, “Why this waste? 9 For this ointment could have been sold for a large sum, and the money given to the poor.” 10 But Jesus, aware of this, said to them, “Why do you trouble the woman? She has performed a good service for me. 11 For you always have the poor with you, but you will not always have me. 12 By pouring this ointment on my body she has prepared me for burial. 13 Truly I tell you, wherever this good news is proclaimed in the whole world, what she has done will be told in remembrance of her.”

Last night, Paul talked about several art works… painting, sculpture… in which the Crucifixion is shifted into the artist’s own time and place.

We would do well to consider this story, too as a dynamic one… alive today, even among us this week.  It is found in all four Gospels, with certain differences that lead commentators to say that there is not one story but two stories.  For in John’s Gospel [12:1-8], the woman is Mary and sister of Martha, and in Luke [7:36-50] she a nameless and somewhat shameless woman who lets down her hair to wipe Jesus’ feet after washing them with her tears.  In the Gospels of Matthew and Mark, the woman is not identified as a sinner, or even named Mary, yet all four narratives contain references to the extravagance of her gesture.

Here, in Matthew, the story comes after a series of parables about the end time… the story of the wise and foolish bridesmaids, the servitors entrusted with different fortunes (talents), the sheep and the goats… and Jesus’ has just exhorted his followers to do good to those who are thirsty, or hungry, or in prison. and that will be done to him.

So when in this next episode, the disciples immediately ask why that treasure wasn’t sold to get money to do good to those who were thirsty, or hungry, or in prison, it is a nice literary touch, yes?  But even if they are looking towards the end time, they are not living it!

Look at what happens in each version of this story.  A woman approaches Jesus and pours expensive oil or ointment on him. Then right away, the witnesses get upset at her. In one strand, her morals are the problem, in another her personal sense of how to use her financial resources comes under fire.  But what’s really going on?

The first thing to notice is that the witnesses are profoundly uncomfortable to see what she is doing.  And immediately critical of her.  So the story becomes a story ABOUT her and about their reaction to her.  Notice that the writers don’t give us her reaction to them at all.  She is almost oblivious of them, isn’t she?

Her concern was with Jesus. And unlike his disciples, she obviously believed what he had been telling them, that he was going to die.  Her act was an act of consecration, a foretaste of his burial, and Jesus accepts it without question.

And how do WE deal with this story? Don’t we act just like Simon, or like the disciples– launching ourselves straightaway into a long discussion of exactly how Sins are forgiven (like, do you have to be sorry a lot?) or exactly when the divine economy trumps the human economy and human expectations, and suddenly we are …. comfortably I must say, since I am myself prone to being judgmental….back in the territory we’re used to.

But she is ahead of us:

The Ignatian teachers have a lot to say about the movements of the spirit, but when they come to Holy Week they give very simple advice.  Just stay with Jesus.  Be with him however you can.  Look, listen, touch, smell, speak or cry or sing, allow yourself to be open to what others in the scene… then or now… are doing or saying or living.

Because before you can understand it, you need to have experienced it.

What we CAN understand, what I offer to you as a kind of litmus test, is to let your experience include your own impatience, crankiness.  Not judging youself, that would cut you off from the teaching of the Holy Spirit.  Open up to what is happening in you, because what causes it is surely this holy story itself.

I was having coffee earlier today with a friend who served in the Marine Corps; he told me that when someone later asked him “Is it true Marines always run towards the sound of gunfire” he replied “Well, I’m a short guy and if I want to see what’s happening I need to get there first.”

Think of your own negative feelings  … explosions of impatience or  explosion of your own anger just like this.  Don’t just stand there waiting for the aftershocks, move towards where they are coming from.

If the disciples, if Simon, had done that, I think they might have discovered and recognized a certain ENVY in themselves.

This woman was showing love to the most loveable one. She was accepting the incredible fact of his death right in the fullness of life.  She knew who he was, and she was entirely with him.

Truly I tell you, wherever this good news is proclaimed in the whole world, what she has done will be told in remembrance of her.”

(And I remember reading somewhere that this little word TRULY is a signal used by the people who wrote down the Gospels to show that what comes next is the carefully transmitted oral record of what Jesus actually said. So TRULY doesn’t mean ‘I am speaking true’ but ‘These are his actual words’.]

Truly I tell you, wherever this good news is proclaimed in the whole world, what she has done will be told in remembrance of her.”

The story we will hear and live together in the next week is old. Sometimes it can seem that it doesn’t change.  But because all humans change and grow, the story grows too, it is never really the same.

Allow it to surround you/ enter in to it, or let it enter into your life/ in unexpected ways.

Then, every once in a while, ask yourself,

And give thanks for it. That will be enough.